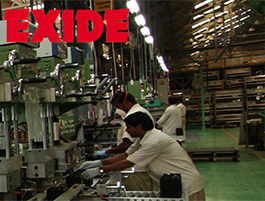 “EIL has further invested an amount aggregating to Rs33.17cr by way of subscription to the equity share capital of its subsidiary, Exide Leclanche Energy Private Limited” (hereinafter referred as ‘JVC’). With the above investment, the equity shareholding of EIL in JVC stands increased from 77.87% to 80.15% of the total paid-up share capital,” company said in a regulatory filing on Monday.

Exide Leclanche Energy deal in manufacture, assembly, trade, sale and distribution of lithium ion batteries, module making and associated systems in the Territory (Battery Pack Assembly Plant). It also does contract manufacturing/ sourcing of modules for third parties in the territory on a case to case basis for strategic reasons as may be agreed between the Parties.

“To meet the funding requirement, particularly the Capital Expenditure projects of JVC. With the current investment, EIL shareholding in JVC has increased by another 2.28% from 77 .87% to 80.15% of the paid-up equity share capital,” company shared the rationale behind the investment on Monday in a regulatory filing.