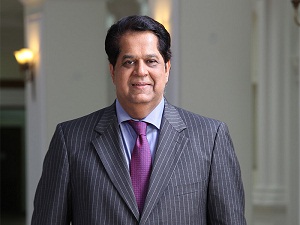 The New Development Bank was agreed to by BRICS leaders at the 5th BRICS summit held in Durban, South Africa on 27 March 2013.

KV Kamath has been named as the head of the New Development Bank of BRICS nations. The New Development Bank was agreed to by BRICS leaders at the 5th BRICS summit held in Durban, South Africa on 27 March 2013. It was later decided that the first president will be from India, the inaugural Chairman of the Board of directors will come from Brazil  and the inaugural chairman of the Board of Governors will be Russian.
Kamath is non-executive Chairman of Infosys and non-executive Chairman of ICICI Bank. He has a degree in mechanical engineering and did his management education from the prestigious Indian Institute of Management, Ahmedabad. Kamath began his career in 1971 at ICICI, an Indian financial institution that founded ICICI Bank and merged with it in 2002. In 1988, he moved to Asian Development Bank and spent several years in Southeast Asia before returning to ICICI as its Managing Director and CEO in 1996. He achieved the objective of transforming ICICI into a technology-driven financial services group and the first universal bank in India. He retired as the Managing Director and CEO of ICICI Bank in April 2009, and took up his present position as non-executive Chairman.

Kamath was conferred with the Padma Bhushan, one of India’s highest civilian honors, in 2008. He has received widespread recognition internationally and in India, including being named ‘Businessman of the Year’ by Forbes Asia, ‘Business Leader of the Year’ by The Economic Times, India, in 2007, and CNBC’s ‘Asian Business Leader of the Year’ in 2001. Kamath was President of the Confederation of Indian Industry, the country's apex industry association, from 2008 to 2009.
He is also an Independent Director on the Board of Directors of Schlumberger Limited, Chairman of the Society and Board of Governors of the Indian Institute of Management Indore, and a member of the Board of Governors of Pandit Deendayal Petroleum University, a leading school with primary focus on energy education and research. He has been a co-chair of the World Economic Forum's annual meeting in Davos.