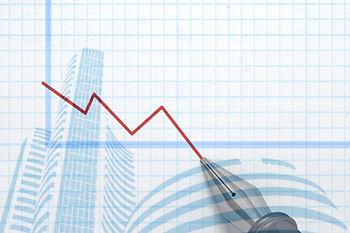 Indian markets pulled back from their record highs on the first day of this week's trading session led by a broad-based selloff and mixed global cues ahead of major economic data. Except for IT, all other sectoral indices nosedived by 2-4% on Monday. Investors booked profit as benchmarks Sensex and Nifty 50 looked overbought in the near term.

In a broader markets term, India's volatility index surged 5.3%. While other indices on NSE dived between 1-2%.

On the sectoral basis, Nifty Metal was worst hit plummeting by 2.9%, while Nifty Medial, Nifty PSU Bank and Nifty Realty slipped by 2.7%, 2.2% and 2.5% respectively. IT index was the only in green, however, on a subdued level with heavyweights TCS and Infosys keeping bears at the bay.

Top bulls on NSE were - Infosys surging by 1.1% followed by Wipro and TCS marginally up.

Top bears on NSE were - Adani Ports plunging 14.5% followed by Coal India dropping 3%. Stocks like SBI, Hindalco and UPL dipped more than 2% each.

Asian markets were on a mixed note as investors prepare for the US Federal Reserves policy later in the week. Also, multiple major stock exchanges in the region closed for holidays.

Last week, on Friday, US markets settled mixed with Dow Jones recovering from intraday lows to close flat while Nasdaq closes with gains of 45 points. Bond yields closed lower at 1.47% the lowest in the last 3 months.

Markets consolidate as they await the Federal Reserve policy meeting on Wednesday to decide market direction on bonds, stocks & currencies.

On the economy front, India announced the index of industrial production (IIP) which rose by 134.44% in April 2021. The government will also present CPI and WPI inflation data later this week.