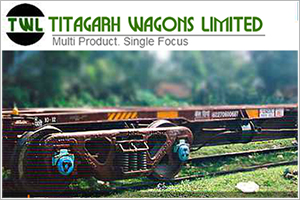 Titagarh Wagons Limited (TWL) informed the exchanges on Wednesday that it has acquired the shares held by Matiere S.A.S., France (Matiere), representing 50% of the paid-up share capital of Matiere Titagarh Bridges Private Limited (“MTBPL”), a joint venture company of TWL.

As a result of the above, the shareholding of TWL in MTBPL has changed from 50% to 100% and thus MTBPL has become a wholly-owned subsidiary of the TWL from July 14, 2020.

The shares have been acquired at a price of Rs1.80 per share being the fair value, as computed in accordance with the applicable provisions of FEMA/RBI. TWL has acquired 75,48,820 equity shares of Rs10 each of MTBPL, representing 50% of its paid-up share capital.

MTBPL was incorporated as a company in India on January 2, 2017 with equal stake in its equity of TWL and Matiere as per the joint venture agreement between them for manufacture of metallic bridges. The turnover of MTBPL since incorporation is nil, however total revenue for the year ended March 31, 2019 was Rs61.05lac.

“MTBPL was formed as a joint-venture company pursuant to joint venture agreement between TWL and Matiere, where each was holding 50% of its paid-up capital, and pursuant to discussions between the joint venture partners covering strategic aspects of business etc., the transaction  was agreed upon and now MTBPL has become a wholly-owned subsidiary of TWL.

Further, pursuant to the agreement between TWL and Matiere, the technical know-how for execution of the ongoing contracts as well as manufacturing and selling of the Bridges by MTBPL in the agreed territories shall continue to be provided by Matiere,” company said.