Amidst the global economic uncertainty and uninspiring intrinsic fundamentals, crude oil prices are poised to descend further. Weakening energy demand on the both sides of the Atlantic and subdued economic activity in China has taken a toll on the energy bulls. On supply side, oil output in US has been on a constant rise for the past six months. EIA estimates that oil production in non-OPEC countries should average 52.72mbpd this year, 120,000bpd higher than the previous estimate. In addition, OPEC output has remained healthy, as escalating production by Saudi Arabia has managed to offset the fall in Iranian oil supply to a large extent. OPEC output was reported at 31.58mbpd, as compared with the output target of 30mbpd. Easing supply and weakening demand has put the global oil markets into substantial surplus during the first five months of this year. In this regard, global oil markets have witnessed a hefty surplus of an average 2.2mbpd during Jan-May’12, as compared with a deficit of 0.3mbpd during the same period last year.

On negotiations over Islamic republic’s nuclear program, Iran and Western nations were unable to come out with concrete solution during a recent meet in Moscow. They have agreed to meet again in Istanbul on July 3rd, to resolve significant differences remain between the two sides. Upside in oil price remains clearly constrained, as markets seem to be inferring a positive end to the negotiations considering the fact that both the parties are keen to resolve their respective differences. 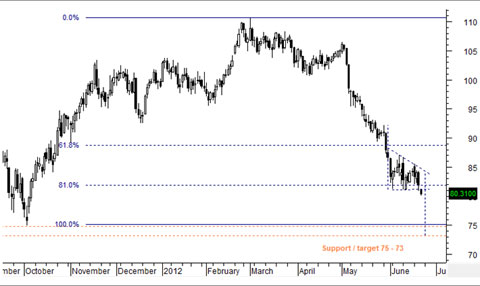 Ever since the break below US$90/bbl, crude oil prices have been struggling to find support at US$81/bbl. While, prices held on to this level and attempted to close above US$86/bbl, yesterday’s massive decline has led to the breach of US$81 which is also the 81% Fibonacci level for the prior rally from Oct’11 to Mar’12. Prices are now poised to drift lower towards US$75/73/bbl support zone before any reasonable recovery can occur.

As far as MCX crude oil is concerned, prices remained in time and price consolidation range of Rs4,550-Rs4,800/bbl since the beginning of this month. In addition, prices have been restricted within flag formation since end of May and have witnessed a strong price barrier at Rs4,800/bbl (medium term) and Rs4,650/bbl (short term). Yesterday’s, breakdown of the above mentioned flag formation paves way for a test of the flag target level of Rs4,300-Rs4,200/bbl. Furthermore, similar breakdown in the RSI also vouches for the expected down trend in crude oil prices. 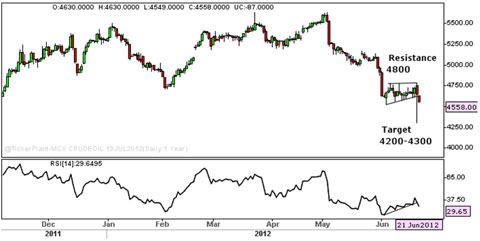 Price of fuel on September 26