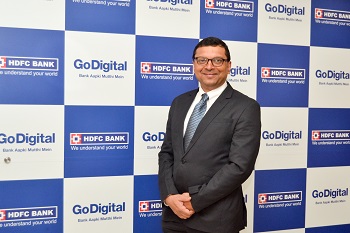 What is the chance that the reversal in oil prices will continue? How sharp can the decline be from the current levels? With a further fall in oil prices, could the INR see a sustained rally way beyond the current levels? These are some of the key questions that the markets are grappling with. We would still advise caution and a careful watch on some of the other risks on the horizon.

Of these risks, the NBFC (Non-Banking Financial Company) problem is one that could linger on for some time and might continue to weigh on Indian assets and the INR. The spike in the short-term borrowing cost (Chart 1) and the likely liquidity deficit could pose a threat to the real economy to some extent. In the short term, any major default on their debt commitments could drive ‘risk-off’ in the Indian market and impact the INR-USD rates.

Chart 1: Rise in the short-term borrowing cost for the corporates 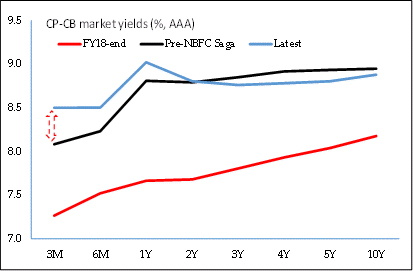 NBFCs generally source funds by issuing debt instruments like bonds, nonconvertible debentures, CDs, CPs, mortgages, and leases along with a significant funding from banks. By the very nature of their businesses, there is an element of asset liability mismatch at times, more so for companies that borrow primarily through short-term instruments and finance long-term assets like infrastructure.

Following the default by a major NBFC (IL&FS), domestic insurance companies, banks, provident funds and mutual funds, which were the major lenders or buyer of debt instruments of the NBFCs, have become somewhat reluctant to lend. As a result, the cost of borrowing for NBFCs has gone up. For example, the interest rate on 3-months AAA CP (which was a major source of funding for the NBFCs) has risen by 40bps to 8.5% within a span of three weeks.

Against such a backdrop, there is a small risk of a liquidity squeeze for the NBFCs, with around Rs80,000 -100,000 crore of their debt papers coming up for redemption between November and March. While we do not see the prospect of a major crisis, there are some legitimate questions about redemptions and rollovers including the possibility of default. This could in an extreme situation foster contagion across this lender class and disrupt the money and debt markets.

Impact on the Economy

Since 1997 no new license has been given for a deposit-taking NBFC. As of now, only a small proportion of all the NBFCs are deposit-taking and thus there seems to be no systemic issue related to depositors.

In terms of credit, the importance of NBFCs in driving the overall lending to the commercial and households sectors has risen in recent years. The share of NBFCs in total credit extended in the economy has increased from around 9.4% in March 09 to more than 17% in March 18.

In terms of consumer lending, during the five-year period (between FY13 and FY17), the share of the NBFCs in the consumer durables financing has jumped to 32% from 19% (Source: ICRA). For the industrial sector, an RBI report (How have MSME Sector Credit and Exports Fared? August-2018) points out that the share of credit provided by banks to the MSME sector has declined since September 2016. Meanwhile, loans extended by the NBFCs to MSMEs have grown strongly at an annual average rate of 35% during the same period and their share in total credit has increased from around 5.5% in Dec-2015 to around 10% by Mar-2018.

Thus, in case of a liquidity shortage, there could be some slowdown in the advances made by the NBFCs and sectors like consumer durables, MSMEs, and housing could be affected to some degree.

That said, we must emphasize the fact that it is misleading to tar all the NBFCs with the same brush. There are entities with robust balance sheets that are likely to have access to bank finance and could find takers for instruments like CPs.

Moreover, it is likely that the banks could re-emerge as a major driver of funding for both the MSMEs and consumer durables, and could fill in the interim gap that may arise because of the slowdown in advances made by the NBFCs. In that case, the impact on the real economy is likely to be marginal. 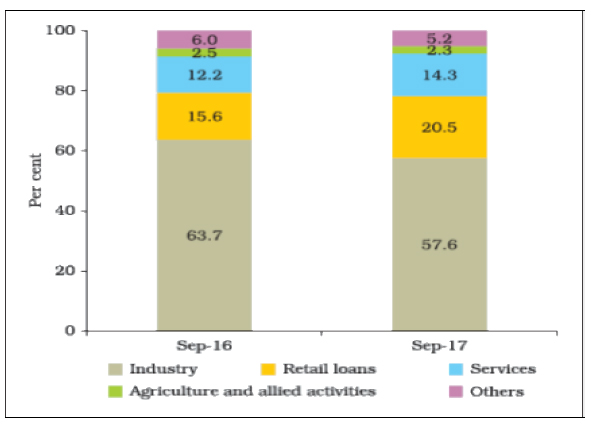 Measures to ease the liquidity-problem

The RBI recently allowed banks to use government securities as level 1 high-quality liquid asset equivalent to the bank’s incremental lending to NBFCs and Housing Finance Companies (HFCs) after 19th October. This will be limited to 0.5% of the bank’s net demand and time liabilities (NDTL). This is likely to ease the mandatory liquidity coverage ratio (LCR) requirements for banks and is expected to facilitate bank lending of around Rs59,000cr to NBFCs and HFCs.

Besides, RBI has allowed banks to lend up to 15% of their capital funds to a single non-infrastructure funding NBFC from the earlier requirement of 10%. The measure is expected to ease restrictions on lending to a single NBFC without breaching regulatory limits.

Meanwhile, the SBI has announced that it is likely to purchase loan assets worth Rs45,000 from the NBFCs for offering liquidity to the sector and to simultaneously fulfill its priority-sector obligations. Initially, the SBI had planned for a growth of Rs15,000 crore through portfolio purchase during the current year, which could now be enhanced by around Rs25,000cr.

Chart 3: Exposure to the NBFC sector 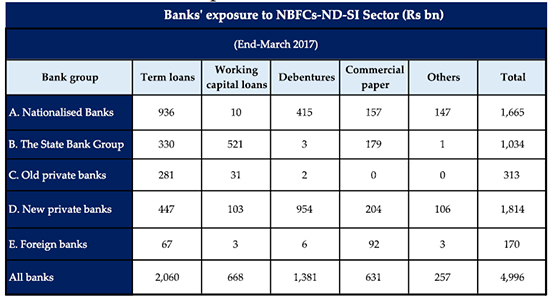 What could be the other measures in the pipeline?

Measures announced so far are likely to ease the situation to some degree. However, there is still some uncertainty regarding the assets-liability mismatches and the extent of liquidity shortfall that might arise. If the liquidity crunch escalates, additional measures could be needed to prevent any major decline in advances from the NBFCs.

There could be a special window, similar to the one that the RBI had opened in 2008 and 2013 in the wake of the global financial crisis and the taper tantrum.  The working mechanism of such a window is not yet clear as there could be questions regarding the risk-free instruments to be used as collateral under such a facility.

As per the current guidelines, only deposit-accepting NBFCs are required to meet the SLR norms and thus they might have the required risk-free-collateral. For the other non-deposit NBFCs, or in the likely absence of appropriate risk-free collateral, the modus operandi of the special window could be similar to the indirect lending window (channelized through banks) that was implemented in 2014 for Mutual Funds.

Having said that, special liquidity window is likely to be only the last resort measure in our view. Since the damage has been contained to a large extent, the possibility of such a window is limited.

On the other hand, we believe securitization of assets (similar to what the SBI is implementing) is more likely and could be considered as an alternative strategy by other banks as well.

Banks had faced a significant challenge from disintermediation vis-a-vis the NBFCs that had over a period of time turned to mutual funds. Following the IL&FS ‘çrisis’ there has been a reversal with investors pulling out of the liquid and fixed-income funds that had supported the NBFC funding. Estimates suggest that Rs2 lakh cr moved from MFs back to banks. With this windfall in deposits, banks could use it to buy good quality assets from the NBFCs. This we believe is a more probable scenario and could help ease a lot of liquidity-related worries going forward. That said, there will be a problem in finding takers for high-risk assets and the paucity of funds for some of the sub-prime tears of the MSME, housing, auto loans (for both new and used cars), gold loans is a concern that has to be addressed separately.

Bottom-line: The IL&FS default may be a one-off case and it must be emphasized that all the NBFCs are not in a bad shape. However, the key feature of any contagion is that there is hardly any differentiation between the goods ones and the not so good ones. In the short-term, it is more of a confidence issue and uncertainty around it could be troubling for the markets. That said, recent policies to stem the crisis and the existence of tested liquidity facility is unlikely to allow disruption to cascade into a full-blown systemic problem.