Read Full Story
Currency traders are unlikely to forget June 28, 2018, anytime soon. This was the day on which the rupee broke through the previous low versus the US dollar and also briefly breached the Rs69/$ mark. To get a better idea of the volatility, take a look at the intraday chart of the rupee. 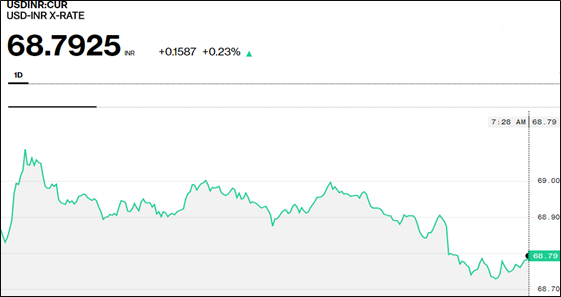 The intraday chart clearly shows the volatility that the USD/INR showed on June 28. Obviously, there was a rush by banks and importers to cover their open dollar exposures and that only added to the chaos in the market. While the INR did breach the Rs69/$ mark quite easily in early trades, subsequent RBI support protected it from depreciating further. But why has the rupee corrected so sharply? 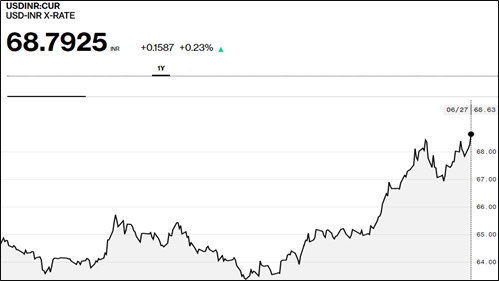 The one-year chart gives a much better picture of the rupee weakening from around Rs63/$ to Rs69/$, a depreciation of almost 10% in a span of just six months. What has driven this rupee weakness?

Three factors drove this sharp fall in the rupee
While there are a number of players in the rupee game, there were broadly three principal factors driving the rupee down. Firstly, it was higher crude oil prices. With Brent above $75/bbl, the impact on the price of oil was huge considering that India imports close to 75% of its daily oil needs. This had a huge impact on retail inflation. Secondly, the RBI was expected to hike rates in tandem with the higher global bond yields. However, the RBI has only obliged with one rate hike. That has raised fears of capital outflows, which is already visible on the debt side. Lastly, the recent trade wars are forcing a weakening of the yuan. That is unlikely to spare most emerging markets, including India. So, what will be the repercussions of this rupee crash? There could be five broad repercussions.

A sharp rise in the trade deficit
India’s trade deficit has already touched the $15 billion per month mark. With imports likely to scale $550 billion this fiscal year, India could have a huge mismatch in terms of the number of months of forex cover. India’s forex reserves currently stand at $412 billion and may not even cover nine months of imports. A weak rupee is technically beneficial for the exports but that is going to be largely negated if nations get into a prolonged trade war. Hence, the weak rupee may not really spur exports. That will leave India with a wider trade deficit gap as India’s imports are largely inelastic.

Concerns by rating agencies over sovereign ratings
When Moody’s had upgraded India’s external ratings last year, there was a warning sounded by S&P that India’s debt levels and external position could be extremely vulnerable. Even Fitch had virtually reiterated that position. At this juncture, a sharp weakening of the rupee could push trade terms against India and like most of the EMs, Indian could also become vulnerable to rating questions. That could have larger repercussions for FDI and FPI inflows. Remember, the Current Account Deficit (CAD) is already above 2% and is likely to get closer to 2.7% by the end of the fiscal.

Higher levels of imported inflation into India
That is bound to happen. Crude oil has strong downstream effects on inflation. For example, India is likely to be hit by higher crude prices. On top of that, there will be the worry about a weaker rupee, which means for the same dollar price of crude you pay more in rupee terms. A weak rupee can trigger a bout of imported inflation spike across the import basket.

Possible sharpening of capital outflows
In the last four months, Indian markets have seen debt market selling by FPIs to the tune of Rs50,000cr ($7.4 billion). Of course, we are nowhere close to the $13 billion sell-off in debt in the middle of 2013 but now may come the real test. Most FPIs have been betting that the INR will hold 70/$. Any breach could lead to much sharper outflows.

RBI response mechanism could include NRI bonds
Last, but not the least, how the rupee behaves from here will largely depend on the RBI’s response to the situation. RBI can protect the rupee with dollar selling only up to a point as most countries, including India and Russia, have learned it the hard way in the last few years. The key issue is that any response mechanism has to be quick. There have been talks about another tranche of NRI bonds like in 2013 and the time may be ripe. A strong surge of flows (with attractive rates and zero currency risk) could be the answer. That, probably, could be the answer to most of the problems created by the weak rupee.