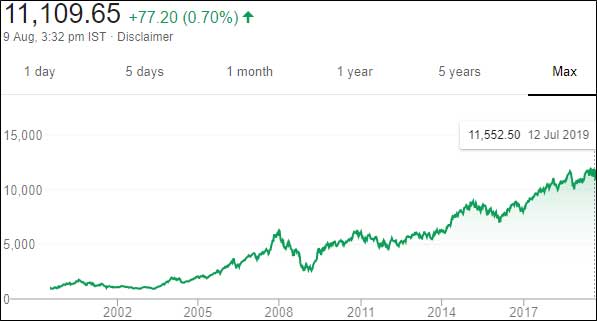 The NSE Nifty has been a veritable benchmark of the stock markets along with the Sensex over the years. While the Sensex has a 40 year history, the history of the Nifty is much shorter. Here we have plotted the Nifty over the last 20 years when it moved from the 1,000 levels to 11,500 including a brief stint above the 12,000 mark.

Nifty 50 has been a 12-bagger over the last 20 years and is a good barometer of the stock markets and the economy since the late 1990s. But what were the major landmarks that highlighted this journey?

An arduous journey to doubling the value of the Nifty

The Nifty was officially launched in 1995 with a base value of 1,000. However, those were tough days for the stock markets. Further, the period between 1996 to 1999 marked a tumultuous journey through five different governments. The Pokhran test in May 1998 led to widespread sanctions on India. It was only after the Kargil war in mid-1999 that the Nifty managed to rally along with the global tech mania. However, that was followed by a global meltdown where technology frontline stocks lost 80-90% of their values. In between 9/11 exacerbated the situation and it was 2004 by the time the Nifty doubled to 2000; an annualized return of just 8% over 9 years.

This was the most defining rally in the Nifty from 2,000 level in 2004 to a high of 6,200 in 2008. During this period, Nifty gained approximately 1,000 points each year. These were the heady years of capital investments by Indian companies, global acquisitions and a revival in consumption. This rally in the Nifty was helped by a massive increase in volumes in Nifty futures and Nifty options, which helped to build institutional demand for the Nifty. This rally finally unwound post the sub-prime crisis.

The period between 2008 and late 2010 was a tumultuous period for the Nifty. From the peak of 6,200 levels, the Nifty lost nearly 65% following the implosion of Bear Sterns and Lehman Brothers. By late 2008, the entire global financial system was on the brink forcing central banks across the world to embark upon unprecedented rate cuts marking one of the biggest infusions of liquidity in history. That worked wonders as the Nifty bottomed around March 2009 and over the next 18 months rallied three-fold to 6,000 levels by late 2010.

The year 2011 and 2013 were tumultuous for the Nifty. European economies were on the brink, India saw distinct slowdown in growth and the Fed taper took its toll on the Indian rupee and the Nifty. Things changed by early 2014 when the BJP projected the charismatic Narendra Modi as its prime ministerial candidate. Nifty rallied on hopes that the Gujarat model will be replicated at a national level. A decisive victory for NDA in 2014 sustained the rally through 2015 as the Nifty more than doubled during this period and got very close to the coveted 10,000 mark. Eventually, the 10,000 mark was only breached in mid-2017.

On budget day 2016, Nifty touched a bottom of 6850 on the back of the first US rate hike and all-round selling in equities. However, 2016 budget was welcomed for its focus on investment and fiscal discipline. That set the tone for the current rally. We must not miss the contribution of mutual funds during this period. Between 2014 and 2019, mutual funds AUM went up from Rs800,000cr to Rs25,00,000cr with monthly SIP collections topping $1.2 billion on an average. Despite the vagaries of FII selling, the Nifty has sustained its journey to 12,000. Of course, retail investments and earnings recovery remains the key.

The story of the Nifty has been the story of Indian economy. A story that is optimistic in the best of times and resilient in the worst of times.