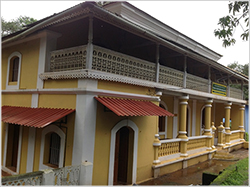 Nestled in the lap of nature, a school of greener pastures, as green as pastures can possibly get, is discreetly creating a resource pool of new-age agriculturists. Sudhir Raikar spoke to Manguirish Pai Raiker the awe-inspiring architect of this one-straw revolution….

Societal norms have their own autocratic ways of thrusting expectations on people. For instance high-flying executives, the implicit diktat goes, should move around in a Mercedes, BMW or Audi – all coveted brands matching the position. So several eyebrows were raised when Manguirish Pai Raiker as the President of Goa Chamber of Commerce and Industry was seen travelling in a humble Maruti 800. He was naturally quizzed about his unlikely preference. His answer of resounding conviction did more than silence his self-appointed examiners; it hinted at a one-straw revolution in the making. He replied, “Rather than buy a fancy automobile for individual posterity, I would invest my hard-earned money for the bright future of our State.”

And he did exactly what he proclaimed, by incepting the Ramanata Crisna Pai Raikar School of Agriculture at Savoi Verem, Ponda in Goa to promote agricultural education in the State of Goa. Raiker magnanimously donated his sprawling ancestral house for the cause which is where the school stands today. What was the motivation behind this monumental decision?

Raiker enlightens, “Thanks to my humble background, I know the worth of education especially in the context of the financially challenged. Way back in early eighties, I helped a friend’s son – a bright lad with good academic credentials - pursue higher education as also arranged for his accommodation in the city. I eventually helped him find a job too. When he came to me to express his gratitude, all I told him was to find someone like him and sponsor his education. This was the start of my freewheeling social activism. Later I initiated an education-enabling program through an NGO and joined hands with another organization called ‘I Create’ which undertakes entrepreneurship development and hand handholding program in the rural sector. During my tenure as the President of Goa Chamber of Commerce and Industry, I initiated this program in the various schools, colleges and self-help groups in rural areas. It was the same time that we started an IT incubation centre enabling and empowering budding IT professionals to start their business ventures.”

A post graduate in Management and Law, Raiker is a first generation entrepreneur and a Visiting Faculty to management colleges. A noted trainer and author in the industrial and management arena, he’s conducted various workshops programs and speaker sessions across the globe. So how and when did agriculture become the focal point of his attention?

Raiker reveals, “Hailing from a small village, I already had an agricultural background. I was always a proponent of best-of-breed farming techniques and the use of modern implements and scientific methods to overcome the vagaries of nature. There was a lot of talk about this glaring need but no action seemed forthcoming. Besides, this sphere of education is not like your commerce or computer coaching initiatives where all you need is some space and you make money from Day one. To make matters worse, the government didn’t regard Agriculture Education as a priority area. On the other hand, this school was indeed the need of the hour as acres and acres of pastures were being consumed by the trading sharks lured by umpteen lucrative purposes of the ‘non-green’ variety. Our only hope lay in educating young minds at the grassroots about the larger cause of soil conservation, organic farming and environmental concerns such that eventually take to the fields instead of running after clichéd jobs. Having firmed up the idea and winning unconditional support from my family, I took the plunge.”

But the road ahead was replete with hairpin bends and arduous detours. Raiker had to put in a herculean effort to realise his dream. He recounts the key milestones of this back-breaking voyage:

“The task was easier said than done of course. The first need was an apt syllabus. The Education Board was very supportive and immediately formulated a Board of studies for the purpose. We also roped in noted agriculture experts for the thought churn. Mr. Pradeep Lotlikar and Mr. Chintaman Perni joined hands with me to establish the curriculum for the XI and XII classes. We travelled all the way to Ratnagiri to seek the blessings of the eminent agriculture scientist and former Vice Chancellor of Dr. B. Sawant Konkan Krishi Vidyapeeth. He gave us valuable guidance and also directed the course design.” 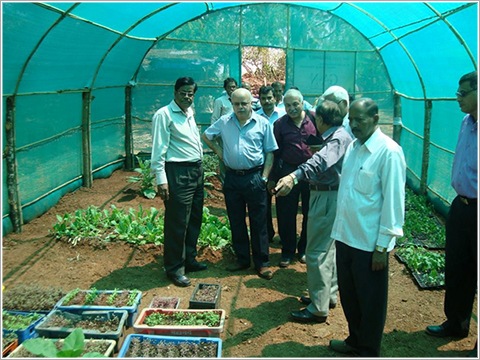 The syllabus was then forwarded to the Bhopal-based National Vocational Education Qualification Framework for correction and confirmation prior to seeking the approval of the Academic Council and the Board. This lead time spanned one year of ceaseless perseverance and persistence at different levels. Thanks only to the personal intervention and peer support; it was possible to complete the formalities within the specified time.”

“With the syllabus in place, the next job was to create awareness among the target audience. We launched a massive campaign targeted at students and invited them to enrol in our school. As this was the first ever school of Agriculture in the State, we personally reached out to the students spread across the State and also sought help from various well-meaning NGO’s. I am truly obliged to the electronic and the print media for their over whelming support to further our mission.” says Raiker.

A staunch pillar of support, and an eminent member of Raiker’s core team, is Mr. Shrirang Jambhale, Gold Medallist, BSc. Horticulture from Kokan Krishi Vidyapeeth, Dapoli and MSW from Tilak Maharashtra Vidyapeeth, Pune. A noted social activist himself, Jambhale manages the school’s day to day affairs and enhancement programs as the principal in charge. Besides, Raiker is actively involved in catering to the micro and macro matters of the school.

Set up under the aegis of The Ramanata Crisna Pai Raikar Education Society, this school is affiliated and recognized by the Goa Board for Secondary and Higher Secondary Education and Department of Education, Government of Goa. Classes are conducted for Std. XI & XII. A diploma course in agriculture, under the guidance of Dr.B.S.Konkan Krishi Vidyapeeth, will commence from June 2014. 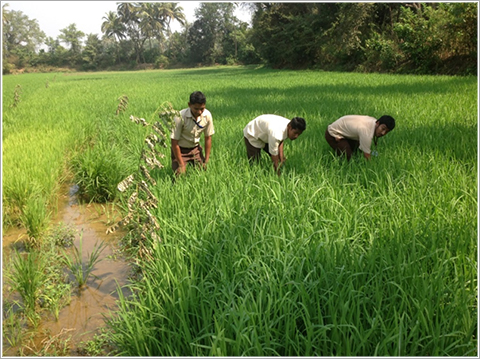 How does the school envisage future growth and innovation? Would they be open to collaboration and co-creation with similar entities across the globe?

Raikar replies emphatically, “Of course yes. Over and above the school curriculum, we also conduct a farmers’ outreach program. We are also shortly commencing a Diploma Course in Agriculture from June 2014 under the stewardship of Dr. B.S. Konkan Krishi Vidyapeeth. The vocational program will focus on developing skills and affinity for agriculture. As for the collaborations, we have initiated MOUs with ICAR, Konkan Krishi Vidyapeeth, Dapoli, India Dutch Education Agency, Netherlands and Michigan State University, Michigan. Faculty members from all these institutions have already visited our school and have conducted coaching classes. They would be regularly conducting ‘train the trainer’ programmes for the benefit of our teaching staff.  Having lauded our efforts, they have also made several insightful suggestions for focused practical training.”

The school’s vision is to promote and develop agricultural skills for increasing agricultural area of operation and thereby increase productivity and quality through progressive farming aimed at promoting self-employment in this sector.

“We have provided this school with the basic needs like two poly houses (one for Horticulture and one for Floriculture), shed net, small nursery, besides space for conducting practical training. A lot still remains to be done.” Raiker reveals.

Going forward, the school intends to create Environmental Awareness as also undertake environment improvement activities like agro-forestry, agro-horticulture, soil and water conservation, sustainable agriculture development, tank de-siltation and watershed management to help build potent linkages between private institutions, government and NGOs. The School predominantly attracts youths from rural areas and tribal populace, those deprived of education and neglect of the society. No fees are charged to these students. And despite its social activism, the school does not receive any Government grant.

Legendary Japanese famer-philosopher Masanobu Fukuoka redefined natural farming with his pivotal book ‘One Straw Revolution’. Back home, Raiker has redefined education in Goa with his own one-straw revolution, a unique agricultural school of greener pastures that represents many a straw in the single stalk that he had planted – of conviction, of hope, of a better future of lush green possibilities. Needless to say, this straw needs the green house of assistance – monetary and otherwise - from all quarters. Prospective students, donors and well-wishers can visit rcpragrischool.com, drop a line at rsaawni@gmail.com or call on 08322340077