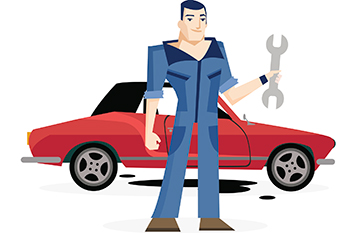 The automotive industry in India has been on a growth trajectory with impressive spikes in sales, production, and exports over the last two years. With an average production of around 24 million vehicles annually and employer of over 29 million people (direct and indirect employment), the automotive sector in India is one of the largest in the world.

For every vehicle produced, direct and indirect employment opportunities are created with employment of 13 persons for each truck, 6 persons for each car and 4 for each three- wheeler and one person for two-wheelers.  The $ 93 billion automotive industry contributes 7.1% to India’s GDP and almost 49% to the nation’s manufacturing GDP (FY 2015-16).

As a major employment generator, GDP contributor and FDI earner, the automotive industry is instrumental in shaping the country’s economy and hence regarded as a 'Sunrise sector' under Make in India.

In order to further promote the sector, initiatives are being undertaken by the Government of India to promote innovation and R&D and create a favourable policy regime to make India a prominent manufacturing destination.

The Automobile Mission Plan 2016 – 2026 envisages creating India as one of the top three automobile manufacturing centres in the world with gross revenue of US $ 300 bn by 2026.

The Automobile industry witnessed a US $ 5.5 bn of FDI inflow into the country during April 2014 to March 2016.

Some of the major foreign investments are listed in the Annexure I.

Rise in Production
Rise in Domestic Sales Rise in exports
Growth trends in the Indian Auto-component Industry in the last two years: Rise in Exports
Exports in the auto-components sector is growing at a CAGR of 18% in the last 6 years. Exports in the last 2 years (2014-16) grew from US $ 19.9 bn to US $ 22 bn..
The auto-component industry contributed 4% to India’s exports in FY 2015-16, with an earning of US$10.81bn. The top export destinations are USA, Germany, Turkey, UK and Italy.

National Automotive Testing and R&D Infrastructure Project (NATRiP)
With an aim to create global competencies in the automotive sector by promoting innovation, R&D and opening of global test centres, the budget outlay of the NATRiP centre was further increased to Rs 3727 crore in July 2016.The time line for completion of NATRiP centres is December 31, 2017 except for the Indore Centre which is June 2019.

Out of the six NATRiP centres, all the facilities  at three centres viz, Automotive Research Association of India(ARAI) at Pune, Vehicle Research & Development Establishment (VRDE) at Ahmednagar and NIAIMT at Silchar have been completed. Some  of the facilities in the remaining three centres namely International Center for Automotive Technology (ICAT) at Manesar, Global Automotive Research Center (GARC) at Chennai and National Automotive Test Tracks (NATRAX) at Indore have been completed and the works for the other facilities in these centres are at advanced stage of completion.

The NATRiP centres successfully developed are:
Major foreign investments in the sector during April 2014 to March 2016