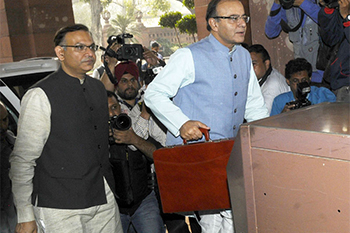 One surprising element of Finance Minister Arun Jaitley’s Union Budget, unveiled on Monday, was that he managed to cater to all major needs of key sectors and the broader economy without putting too much of a tax burden on the taxpayers or swaying from the target for fiscal prudence as specified under the FRBM rules.

Jaitley doled out big money to the rural and social sector, set aside huge capital for the public sector banks and also infrastructure sector and also meet other smaller needs of the economy.

He did all of that without altering the personal income-tax slabs. Instead, he offered some extra incentives to the individual taxpayers on rent allowance and others. There was no tweaking of the long-term capital gains tax, something the market had widely feared.

There was no hike in the service tax, neither did the list of areas under the service tax bracket grew. He didn’t raise duties for too many goods or commodities also. He only taxed tobacco and tobacco-related products, slapped a green cess on both small cars and SUVs and put a luxury tax on high-end cars and other select goods.

Yet, he managed to stick to fiscal discipline. The money set aside for banks was small. But the Finance Minister clarified that the amount mentioned is what he has frontloaded and that he would provide more as and when required.

The market borrowing target was pegged at Rs 6,00,000 crore, which was less than last year and far below market projections. Higher government borrowing is considered bad for corporate India, as it tends to crowd out funds for the private sector.

So, where will the money come from? There was no visible expenditure cut, but allocations rose across sectors. However, the government looked focused on the quality of spending.

The maths goes like this. The government expects about Rs 98,000 crore from the sale of telecom spectrum and plans to raise Rs 56,500 crore from disinvestment, which will take care of the additional expenditure. The government has projected revenues to grow 14 per cent, which looks achievable if the GDP were to grow at an 11 per cent nominal rate.

And there could be additional revenues from the measures to end tax litigations and dispute resolutions, which have not been included in revenue calculation and can provide a cushion. Plus, the government has also launched a new income disclosure scheme, which should mop up some extra tax revenue.

Union Budget 2016- Rocking or shocking for the stock market?