The Top VC funded companies in Q2 2014 were led by ChargePoint, a provider of an open electric vehicle (EV) charging network, which raised $22.6 million.

Mercom Capital Group, llc, a global clean energy communications and consulting firm, released its report on funding and mergers and acquisitions (M&A) activity for the smart grid sector for the second quarter of 2014. 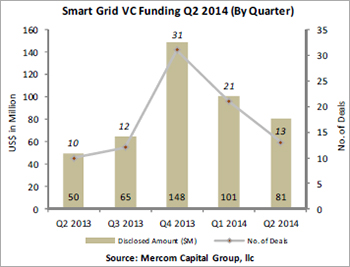 The Top VC funded companies in Q2 2014 were led by ChargePoint, a provider of an open electric vehicle (EV) charging network, which raised US$22.6mn. Sunverge Energy, a developer and manufacturer of distributed energy management systems, raised US$15mn, and On-Ramp Wireless, a developer of wireless solutions for energy automation and M2M communications, received US$13.6mn in an amended funding round. Gridco Systems, a smart power management technology company for utilities and industrial power consumers, raised US$12mn, and rounding out the Top 5 was GeoDigital International, a provider of geospatial information solutions to the electric utility, which raised US$5.8mn.

Twenty-five investors participated in VC funding rounds in Q2 2014. Siemens Venture Capital was the only investor participating in more than one deal.

There were 16 Smart Grid M&A transactions (four disclosed) in Q2 2014 totaling US$147mn. The top disclosed transactions were the US$117mn acquisition of Power-One’s Power Solutions business by Bel Fuse, an electronic product manufacturer for computers, networking and telecommunications, followed by the US$23.5mn acquisition of the entire issued share capital of Utility Partnership Limited, a provider of end-to-end utility infrastructure, smart metering and energy management solutions in the UK, by Smart Metering Systems PLC, a provider of advanced smart metering solutions, the $3.86 million acquisition of BGlobal Metering, a company which designs, supplies, installs and manages smart energy metering systems, by Energy Assets Group, an independent provider of industrial and commercial gas metering services in the UK, and the $2.3 million acquisition of VCI Controls, a heating ventilation and air conditioning solutions provider, by SustainCo, a provider of infrastructure solutions and services. 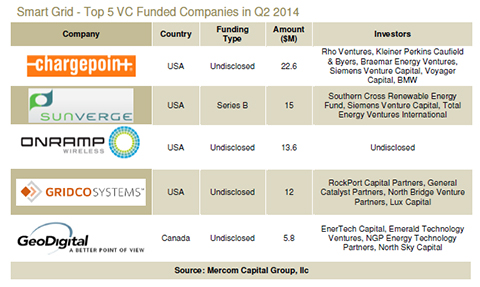 Given the convergence of technologies, in 2014 Mercom has expanded its Smart Grid coverage to include Battery/Storage and Energy Efficiency (Efficiency) sectors.

Companies in the Battery/Storage space received $90 million in six deals, compared to US$180mn in eight deals in Q1. There was one deal each in Sodium-ion, Flow Batteries, Zinc-air, Liquid Metal Battery, Supercapacitor and Thermochemical Energy Storage.

There were nine M&A transactions in Battery/Storage, of which only three transactions were disclosed totaling US$24mn.

Efficiency companies raised US$113mn in 16 deals in Q2, compared to US$156mn in 12 deals in Q1 2014. Home/Building/Data Center companies had four deals and Audit/Retrofit companies had three deals. There were two deals each in Software, Lighting, Temperature Control, and Energy Monitoring companies. There was one Efficiency Finance company which raised funding in Q2. There were 36 investors involved in Energy Efficiency funding deals in Q2.

There were 10 M&A transactions this quarter in the Efficiency category, of which only four had disclosed details totaling US$409mn.

Intersolar India 2016: India, one of the fastest growing solar markets in the world