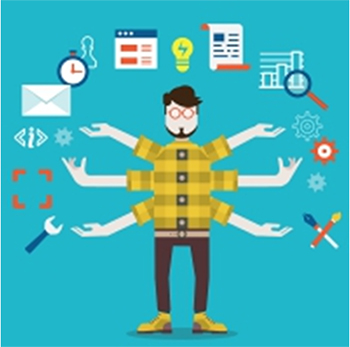 Economics for Everyone: Gig economy

A gig economy indicates an environment in which temporary positions are common and organizations contract with independent workers for short-term engagements.

The concept of Gig economy

A gig economy indicates an environment in which temporary positions are common and organizations contract with independent workers for short-term engagements. Accordingly in a gig economy, temporary, flexible jobs are commonplace and companies tend toward hiring independent contractors and freelancers instead of full-time employees. A gig economy is different from the traditional economy of full-time workers who rarely change job and believe in a lifetime job and career.

According to reports, the number of temporary contract workers has been increasing year by year. A 2011 report from the McKinsey Global Institute found that 58% of American employers predict their workforce will contain more temporary and part-time workers in the next five years. In the UK it's estimated that five million people are employed in this type of capacity. According to studies, in the US there are many jobs low-wage, they are also temporary and insecure. According to the American Staffing Association, the temporary industry added more jobs in the United States over the last few years.

Supporters of the gig economy claim that people can benefit from flexible hours. The flexible nature often offers benefits to employers, as they only pay when the work is available, and don't incur staff costs when the demand is not there. Also, some of the perceived benefits include that by embracing the open-talent economy helps organizations blend full-time employees with short-term consultants, making them efficient.

According to experts it is the result of macroeconomic forces — globalization, technological change and emerging competition. In response to these factors employers generally have followed measures lowering wages and cutting benefits, converting permanent employees into part-time and contingent workers, busting unions and subcontracting and outsourcing jobs. All these leads to cutting costs and sustaining the business.

As discussed the above factors has also contributed directly to a decrease in jobs as technology, digitalisation and software replaces many categories of work. Other influences include financial pressures on businesses leading to further staff reductions and this is further propelled by the entrance of the new next generation of workers.

On the side of the employee, since last few decades the trend has been that professionals often find that they need to move around or take more than one position in order to afford the lifestyle they want. They also tend to change jobs and even careers many times throughout their lives, so the gig economy is also a reflection and evolution of this trend.

Let us briefly look into some of the theories of economics in this context. Karl Marx’s theory predicted in the early days of capitalism that technological change would tend to be labor-saving and this labor-saving technological change would cause increasing unemployment (the “reserve army of the unemployed”) which in turn would put downward pressure on wages and the wage share of income. The labour theory of value has indicated that technological improvement in the means of production leads, eventually, to immiseration of the labour.

According to economists, a firm or an organizations exists to convert resources into products or services for consumption. Production cannot occur without the firm incurring costs. Firms attempt to minimize costs of production through an efficient economic structure, which can be achieved through internal markets, external markets or a combination of both. The structure of the firm itself is characterized by a series of contracts subject to continuous renegotiation in order to enhance efficient production. A firm could procure all resources needed to produce and deliver the final product to the consumer through use of contracts with service providers in the open market.

According to research by Prof. CP Chandrasekhar and Prof. Jayati Ghosh (2014), there is strong evidence of substantial increases in subcontracting in India by the formal manufacturing industry to more informal production arrangements since 2001. The study indicates that the Indian industry has proved itself to be adept at simply sidestepping labour laws through widespread use of sub-contracting where possible and use of contract labour without workers’ rights in other situations.

According to research by Chicago Booth Review scholars (2017) that the share of contract workers used by Indian companies with more than 100 workers increased from under 30 percent to almost 60 percent between 1990 and 2011. To quote the study “By 2011, contract workers accounted for about 36 percent of total employment among Indian establishments with more than 100 workers.” More broadly, the researchers set out to estimate the effect of contract labor’s rise—to 1.3 million contract workers in 2014—on the Indian economy. The research indicates that, the rise in contract labor in the 2000s to 36 percent of total employment increased manufacturing output by 0.56 percent. The researchers also point out that the increased supply of contract labor over the time studied increased the number of new products manufacturing firms introduced and the amount of inputs they sourced.

In recent years there are tribunal hearings have gone against employers looking to classify staff as independent contractors. Last year Uber drivers in the UK won the right to be classed as workers rather than independent contractors. The ruling by a London employment tribunal meant drivers for the ride-hailing app would be entitled to holiday pay, paid rest breaks and the national minimum wage. Uber is appealing against the tribunal finding against it. The GMB union in UK described the decision as a "monumental victory" for some 40,000 drivers in England and Wales. Also, a tribunal found that Maggie Dewhurst, a courier with logistics firm City Sprint, should be classed as a worker rather than independent contractor, entitling her to basic rights. Also towards the end of last year, a group of food takeaway couriers working for Deliveroo said they were taking legal steps in the UK to gain union recognition and workers' rights.

The workers in the gig economy are categorised as independent contractors. That means they have no protection against unfair dismissal, no right to redundancy payments, and no right to receive the minimum wage, paid holiday or sickness pay. It is an irony that often politicians, policy makers across nations promise job creation, but rarely few of them talk about what kinds of jobs are being created.

Temporary employment tends to be lower paid and lacks economic security. According to reports, since 2000, the percentage of temporary workers in OECD countries has increased by more than 1%. Experts feel that, the consequences of the current unemployment situation may be felt for decades eventually undermining financial stability. The threat to stability has become a grave concern and challenge.

According to Economists, since the financial crisis 2008, global unemployment has increased and has still not fully recovered. Persistent unemployment is damaging the economic recovery and there is concern that the longer you’re unemployed the harder it is to find a job. The tough labor market for young people may cause even more harm. Young people without jobs, who miss out on skill development, may bear the impact of the current labor market for their entire careers. Developed markets that face aging populations will increasingly rely on young workers to fund their entitlements, which will require high economic growth rates and productive young workers.

The challenge posed by the emerging trend of Gig economy is complex and can be contagious. It threatens global financial stability, which is probable one of the key reasons that global multilateral organizations such as World Bank, ILO, UN, IMF and many governments are increasingly started focusing on the problem of   unemployment.