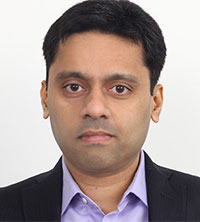 Rajeev Radhakrishnan, Head- Fixed Income and Fund Manager, SBI Mutual Fund, an industry veteran with over 15 years’ experience, joined SBIFM as a fixed income portfolio manager in 2008. He currently heads the Fixed Income desk at the AMC. Prior to joining SBIFM, Rajeev was Co‐Fund Manager for Fixed Income with UTI Asset Management for seven years. Rajeev is an Engineering graduate and holds a Master’s degree in finance from Mumbai University. He is also a charter holder of the CFA Institute, USA.

In an interaction with Sabyasachi Mukherjee of IIFL Wealth & Asset Management, Rajeev Radhakrishnan remarked, “Despite the post policy correction, Indian bond markets have outperformed other markets over the last few months. Near‐term yields are unlikely to move lower even as excess liquidity provides support.”

Excerpts of the conversation...

Where do you foresee the near to mid-term yields moving?
The fixed income market in India is currently in consolidation phase and repricing mode. The euphoria of the last few months has begun to fade and market pricing is now aligning with the regime shift in global monetary policy cycle, potential higher role for fiscal policy measures, long awaited easing of global deflation concerns and more importantly the change in RBI policy stance. Notwithstanding the post policy correction, Indian bond markets have outperformed other markets over the last few months. Near‐term yields are expected to move sideways given the support of excess liquidity.

What’s your take on the global fixed income market, with inflation rising across the globe and yields inching higher?
Global fixed income trends over the last few months have been shaped by the realization that incremental monetary policy experiments could prove counterproductive as well as the acknowledgment of the potential higher role for fiscal policy. The up move in US commodities and election results have only reinforced the directional shift with the resultant impact in terms of easing deflationary fears, higher government expenditure and potential faster normalization of monetary policy. Currently this trend is likely to sustain.

Is it the right time to move away from duration funds in favour of accrual funds?
As system liquidity remains in surplus and could remain so for a while, the short end of the curve should stay well supported. As the scope for large capital gains reduces, carry would play a larger role going forward in all strategies. However, investor preference for accrual funds should be guided by risk tolerance besides liquidity and time horizon considerations.

How do you view inflation? Do you expect any rate cuts by RBI in coming quarter?
Inflation concerns have receded over the last few years, helped by various policy measures, good monsoon, better food management and global deflationary environment. Despite the recent lower readings, forward looking estimates still track an average expected range of closer to 5% over the next year. With the RBI firmly committing to the 4% CPI target, the scope for near term rate cuts in coming quarter is ruled out.

What would be the effect of 2017-18 budget’s borrowing program announcements on the fixed income market?
Union budget announcement is largely neutral for the market in the near term with borrowing numbers unchanged even with a marginally higher fiscal deficit target for FY18. The FRBM review committee’s suggestion to target a reduction of general government deficit to 60% is a structural positive measure for long term debt sustainability.

What asset allocation strategy do you suggest for investors?
Asset allocation preference should be guided by risk tolerance, time horizon and liquidity preference. Fixed income allocation, especially for low risk products, can still increase given the higher financial inclusion as well as relative attractiveness in the context of lower interest rates available on bank fixed deposits.