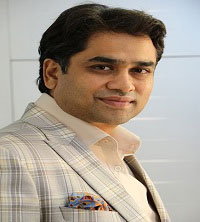 Pradeep Gupta, Executive Director, Jagson International Limited. Pradeep Gupta has been involved with the Jagson Group of Companies since 1999. For the last 17 years, he has been independently looking after the major offshore drilling and operation, which has shown tremendous improvement since then. His new generation approach has enabled him to attain the desired results. He very successfully and smoothly completed the contracts of the mat-supported jack-up rig Deepsea Matdrill, which is owned by the Jagson Group, and other rigs against stiff global competitions.

Mr Pradeep Gupta has done his graduation in B.Com from the University of Delhi. He has also studied management in the United States. He is a regular member of the Petrotech and CII. Mr Gupta has gained excellent experience and mastery in offshore oil exploration and drilling industry. He is one of the youngest entrepreneurs in this field in the country. His efforts have been recognised by the offshore industry platform oceantex and was felicitated with the "Young Entrepreneur award" in 2008. Mr Pradeep Gupta is also closely connected with the group's other business interests, like an outlet of petroleum products in Kyrgyzstan, a CIS country. He started his own Film Production House 'MAHIMA PRODUCTIONS' in May 2013. His first Bollywood venture "FUDDU" released in October 2016.

Jagson International Limited, a company based in New Delhi and Mumbai, is a Limited Company with the entrepreneur's vision of entering into new fields of Hi-tech and priority sectors, and is one of the first private sector companies to enter into the field of off-shore drilling for Oil and Gas exploration, which was hitherto a forte of foreign companies only. Since the exploration of oil had only been delved into by the government and foreign companies, a new idea was conceptualised by the Chairman, Mr J.P. Gupta, who envisioned the growth of this company. Since the inception, their aim has been more than just increasing operations all over India. They have been working towards bringing the latest technology in the exploration of oil and gas and succeeded in developing a smooth cross-culture environment on their rig.

Replying to IIFL, Pradeep Gupta said, “In order to remain viable in businesses, the industry needs to cut down operational expenses. These goals can only be achieved if the sector embraces technology in order to improve efficiency.”

As the ways to do business is evolving across the globe: What role do you see technology plays in your business?
The dramatic drop in oil prices created great uncertainty in the world market. The outcome was grim. The price for oil was cut in half. Tens of thousands of workers were laid off. There were company closures and mergers. Scheduled projects were cancelled or shelved indefinitely.

Yet, the industry found a way through the uncertainties. It is even producing more oil in the process. The industry found that greater efficiencies offered a certain path forward to maintaining competitiveness. Utilisation of new technology plays a key role.

How has technological advancement help in Oil & gas drilling sector?
In order to remain viable in businesses, the industry needs to cut down operational expenses. These goals can only be achieved if the sector embraces technology in order to improve efficiency. The Modern computational methods and fast processing systems combined with a wealth of data have made ‘digital oilfields’ a reality where engineers, geophysicists and geologists can simulate an entire oilfield. These simulations can help in finding the most optimal spots for oil extraction with lowest costs in drilling and getting maximum output in extraction. These big data analytics can reduce the need for hiring a large number of data operators thus reducing staffing costs while improving the overall efficiency of the industry.

Since the industrial revolution and our hunger for energy, we’ve depleted a very large amount of our oil reservoirs and this demand is still something which moves the world. Our powerful modern computers and the pool of data available make it possible to find reservoirs which may not have been possible to find just a decade ago.

Technology is powering these extractions by eliminating the need to establish expensive bases in remote areas and to the point that even doctors are contacted through video conferencing to diagnose workers in remote areas instead of transporting them to shore in an emergency.

How much does the company spend as a percentage of revenue on new technology?
Over the next three to five years, 80 percent of upstream oil and gas companies plan to spend the same, more, or significantly more on digital technologies as they do now. We are Jagson Group spend 25-30 percentage of revenue on new technologies. The investment is majorly focusing on Big Data and Analytics, IOT (Internet of Things) and mobile.

Is the group looking at more cutting edge technological innovation to derive next phase of growth?
Yes. New technologies that minimise revenue loss and protect both personnel and the environment are transforming offshore inspection best practice.

During the boom years of the 1960s and 1970s, with pristine new rigs popping up everywhere from the UK Continental Shelf to the Caspian Sea, the biggest concern was getting the raw product out of the ground and into the refinery.

Digital radiography, hyperspectral imaging, deepwater remotely operated vehicles (ROVs), the whole concept of the digital oilfield; such technology was still in its infancy during the era of 'easy oil'.

To succeed in today’s market, oil and gas operators must not only have accurate measurements on which to base their decisions, they need to obtain this information in the most cost-effective way and the robotic solution can be a way out.