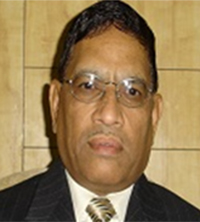 The company has created process driven organisation backed by state of the art facilities and unique R & D Lab and robust business model helped us to provide specialised textile products i.e. value added yarns. The company has crossed many milestones in its journey so far and we are ready to accelerate faster, now we have both expertise and the experience.

Replying to IIFL, Mr Shankarlal Sitaram Somani said, “With the implication of GST after imposition in the system, there will be ease of doing business in India because multiple effects of indirect taxes and compliances will be minimised and cascading effect of taxation will come to end.”.

Rupee is hovering around its 20-month high. Sumeet Industries Limited export its products more than a dozen companies. How the rupee strengthening pose risk to your business? And How do you plan to tackle it?
Sumeet Industries Limited is exporting its all manufactured products to different parts of the world. Presently the company is exporting to Egypt, Saudi Arabia, China, Argentina, Poland, Vietnam, Philippines, Portugal, Morocco, Columbia, Bangladesh, Russia, Ethiopia, Mexico, Nepal, Brazil, Peru, Algeria, Thailand, U.S.A., Singapore and Turkey etc. Exploring export markets has been a key area of focus for the company.

The Company is sourcing its main raw arterial namely PTA and MEG both from domestic and international suppliers. In order to hedge the company’s exposure to foreign exchange and interest rate, the company enters into forward contracts.

In fact, rupee strengthening will cause to cheaper import and which will impact reduction in the cost of raw materials. Besides, our exports adjust as a natural hedge over imports since both are flowing parallel.

What are implications of Goods and Services Tax for Indian Textile Sector?
With the implication of GST after imposition in the system, there will be ease of doing business in India because multiple effects of indirect taxes and compliances will be minimised and cascading effect of taxation will come to end.

We sell our products outside the state also against C-FORM. It attracts an additional 2% CST cost which is borne by the Consumer. After implementation of GST, this additional burden will not be applicable and prices will be reduced to that extent and vice versa in the purchase of good from outside our cost will be reduced by 2%.

Despite this, the textile industry as a whole would benefit from the introduction of GST due to following changes-:

1) GST will result in ‘Fibre-neutrality effect’ on the Indian textiles sector, according to the Ministry of Textiles, that means all man-made and natural fibres will be treated equally from the tax point of view and tax rate on our product will be lower than existing rate.

2) GST would enable a smoother input credit system, which would shift the balance towards the organised sector.

3) GST is also likely to subsume the various fringe taxes like Octroi, entry tax, luxury tax etc. which would help reduce costs for manufacturers in the textile industry.

4)Under GST, there will be input tax credit available for the tax paid on capital goods.

Indian Textile Industry is populated by a massive pool of organised workers. Government doled out initiative like “Pehchan” to protect the artisans. Do you think these weavers can coexist with automation? What are the steps the private players are taking to protect this segment of workers?
Earlier Indian Textile Industry is dominated by unorganised sector. Rising disposable incomes and increasing brand awareness especially in urban and semi-urban markets resulting strong demand for branded apparels ad fabrics. Consumers are showing their interest in the purchase of quality fabrics. Thereby experiencing day by day this trend to continue and organised sector will be benefited in whole.

In Power Loom Textile sector also, entrepreneurs are replacing their old machines with semi and fully automated machines. It is also experiencing that a massive change has been seen in technology especially in weaving and knitting sector. Old traditional machines which are more labour intensive are replacing with fully automated high-speed machines. These machines are well equipped with the latest technology and also absorbing less power comparatively.

The Government of India plans to introduce a mega package for the power loom sector, which will include social welfare schemes, insurance cover, cluster development, and up gradation of obsolete looms, along with tax benefits and marketing support, which is expected to improve the status of power loom weavers in the country. An amount of Rs 2200 crores have been allocated in the budget of 2016-17 for upgrading labour skills.

Existing works are being trained to operate the hi-tech machinery and there would no impact on unemployment of existing workers because large expansions have been taking by various small and big houses in this sector.

What are the expected benefits of “Make in India” on the domestic Textile industry?
The high Ambitious mission of our Honourable’ Prime Minister “Make in India” has paved the growth path of Indian Textile Industry in a gigantic form. Backwards and Forward integration is being taken place both in organised and unorganised sectors so far. The future for the Indian Textile Industry also looks promising, buoyed by both strong domestic consumption as well as export demand. With consumerism and disposable income on the rise, the retail sector has experienced a rapid growth in the past decade with the entry of several international players like Marks & Spencer, Guess and Next into the Indian market. The organised apparel segment is expected to grow at a Compound Annual Growth Rate (CAGR) of more than 13 per cent over a 10-year period.

The Union Ministry of Textiles, which has set a target of doubling textile exports in 10 years, plans to enter into bilateral agreements with Africa and Australia along with working on a new textile policy to promote value addition, apart from finalising guidelines for the revised Textile Upgradation Fund Scheme (TUFS).

Indian Textile segment is threatened by the emerging neighbour markets spread across Bangladesh, China. How do you plan to stay afloat in this competitive climate?
India is the second largest producer of textiles and garments in the world. The Indian textiles and apparel industry is expected to grow to a size of US$ 223 billion by 2021, according to a report by Technopak Advisors.

India has the second largest installed spindle capacity in the world with more than 50 million spindles accounts for about 18% of the world’s spindle capacity and 9% of global rotor capacity. Also, India has world’s highest installed weaving capacity with more than 5 million looms (including 2.4 million handlooms).  Abundant availability of raw materials such as cotton, wool, silk and jute as well as skilled workforce have made the country a sourcing hub. The most significant change in the Indian textiles industry has been the advent of man-made fibres (MMF). India has successfully placed its innovative range of MMF textiles in almost all the countries across the globe.

Earlier, Indian Textile industries are facing a lot of difficulties in matching prices and delivery schedules in exporting of textile goods in competing with neighbouring markets like Bangladesh and China.
In the last decade, a number of big houses including Sumeet Industries Ltd. have expanded their capacity and setup integrated plant with modern technology of international standard. Presently textile industries are very much competitive in its scale and operation and working at par in cost competition in comparison to emerging neighbour markets spread across Bangladesh, China. Our marketing efforts and quality value added products are helping us reach more customers nationally and internationally.

How Sumeet Industries has succeeded in last five years remained competitive both in Domestic & Internationally?
In last five years Sumeet Industries Ltd. has completed its backwards and forwards integration project of more than Rs 500.00 Crores successfully. The company has successfully commissioned 100000 TPA Continuous Polymerisation plant (CP) and 100000 TPA of Spinning Plant for producing POY, FDY and Texturized Yarns. Later, the company has modified its spinning lines for improving its operational costs and efficiencies. The position of 4 Nos. of existing FDY line has been modified for producing colour FDY Yarns. Process line of P.P.Yarn has been modified for manufacturing Colour Polyester Yarns. Existing winders were replaced with High-Speed winders resulting production capacity were increased. To reduce power cost F.O. bases captive Genset Power plant were installed. Now, the company is going to set up 20 MW Coal based power plant to further reducing its power cost and it fact after operational of coal based power plant company will add 15.00 Crores profit in its bottom line.

The company has retained its position in the industry due to proactive planning, efficient use of resources, capitalising on emerging opportunity and striving on cutting edge technology. In fact, we are enhancing our capacity and focussing on speciality and value-added yarns i.e. micro filament yarns, carpet yarns, dope dyed yarns of different colours, polyester colour yarns.

The company has crossed many milestones in its journey so far and we are ready to accelerate faster, now we have both expertise and the experience.