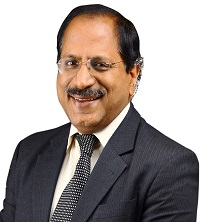 V.P. Nandakumar is the Managing Director & CEO of Manappuram Finance Ltd., a leading gold loan company that is ranked among India’s top 20 non-banking finance companies. Manappuram’s origins go back to 1949 when it was founded by the late V.C. Padmanabhan, father of Mr. Nandakumar. In those days its activity was money lending carried out on a modest scale at Valapad. Mr. Nandakumar took over the reins of this one branch business in 1986 after his father expired. Since then, it has been a story of unprecedented growth, and his leadership was instrumental in scripting the success story.

Manappuram Finance Ltd. is one of India’s leading gold loan NBFCs. Promoted by Shri. V.P. Nandakumar, the current MD & CEO, its origins go back to 1949 when it was founded in the coastal village of Valapad (Thrissur District) by his late father Mr. V.C. Padmanabhan. The firm was involved in pawn broking and money lending carried out on a modest scale. Shri Nandakumar took over the reins in 1986 after his father expired.

Since then, it has been a story of unparalleled growth with many milestones crossed. Incorporated in 1992, Manappuram Finance Ltd. has grown at a rapid pace. Today, it has 3,747 branches across 28 states/UTs with assets under management (AUM) of nearly Rs.13,0140 million and a workforce of 19,372.

Replying to IIFL, V.P. Nandakumar said, “The key challenge over the medium and long term is to maintain the pace of diversification of our portfolio, and transform ourselves from a gold loan NBFC to one with a well diversified portfolio.”

What are the key challenges that the company is currently facing?

The short term challenge is to get back onto the growth track and regain momentum after the slowdown in the third quarter due to the dislocation caused by demonetisation. However, the situation is now almost back to normal and we expect a normal 4th quarter.

The key challenge over the medium and long term is to maintain the pace of diversification of our portfolio, and transform ourselves from a gold loan NBFC to one with a well diversified portfolio. We have an ambitious target to increase the contribution of non-gold businesses to 25% of total business by 2018, and then, take it up to 50% levels, hopefully by 2020. At the moment, our non gold businesses contribute 15% to total business.

I think it was a prudent budget that did well to avoid the populism route. The decision to keep fiscal deficit within the limits will be helpful for the industry as it will provide relief to RBI, should it decide to lower interest rate in the future. The announcement about granting infrastructure status to affordable housing is a major positive, as far as we are concerned.

The recent move of demonetisation has caused an operational slowdown, what was its effect on the company?

As I mentioned earlier, our third quarter performance saw a deceleration in growth that can be attributed to demonetisation and the dislocation caused by the shortage of currency. However, today the situation is almost back to normal and we expect the 4th quarter to revert back to growth.

Since the company has diversified its portfolio towards non–gold business, what are the growth estimates in the current fiscal?

Our non-gold loan business continued to gather momentum. The contribution of new businesses to the consolidated AUM of the company has increased to 15.7% compared to 14.5% in the previous quarter. We expect to maintain similar growth rate in the near future.

What are the NPAs’ estimates in Q4FY17?

NPA levels are expected to decline in the coming quarter as the economy regains footing, and as we go ahead with auctions that were kept pending in the third quarter. We had done this to allow some of our customers more time in the light of difficulties they faced in the aftermath of demonetisation. We expect NPA levels to come down to below 1% by the end of the 4th quarter.

The Q3FY17 results have been excellent, what is the major reason for such a outstanding result?

Our performance in Q3FY17 has indeed been very good compared to Q3 of FY16. We were supported by the fact that gold prices held up very well for most of the calendar year 2016, contrary to the many pessimistic forecasts at the beginning of the year.  Also, the overall reduction in interest rates in the economy contributed to the performance, as we were able to keep a lid on borrowing costs.

RBI has held its interest rates; how do you look at the current monetary policy?

RBI has maintained status quo with regard to interest rates mainly due to sticky core inflation pressures, expected increase in international commodity prices, and the uncertain global (particularly US) environment. Further, it is clear that banks have surplus liquidity following the increase in CASA deposits post demonetisation. Consequently, banks have already put through sizable cuts to their benchmark lending rates, and perhaps the RBI saw no pressing need to bring into effect further cuts.