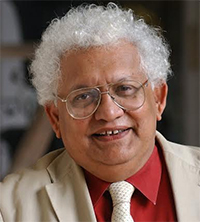 Renowned economist Meghnad Desai has many hats to don. He is the Chairman of the Official Monetary and Financial Institutions Forum (OMFIF) Advisory Board, London and Meghnad Desai Academy of Economics, Professor emeritus at the London School of Economics. The India-born economist with a strong political acumen has always supported the pro-development measures. A global visionary has been awarded the Padma Bhushan, the third highest civilian award in the Republic of India, in 2008. He has rattled primitive economic policies and laid many new ideas that have opened new corridors for the global economy. Desai penned more than 200 articles in different famous national and international publications. He was made a life peer as Baron Desai, of St Clement Danes in the City of Westminster, in April 1991. He successfully spearheaded several crucial projects and has been on the cusp of affairs in different government and private organisations.

MDAE students attract recruiters of leading organisations as the Accademy’s cutting edge curriculum equips students with the ability to solve real world problems.  The program which is a One year Postgraduate Diploma in Economics is designed to ‘skill up’ the student in problem solving and analytics, critical thinking, writing and speaking. The program is offered jointly with the Department of Economics, Mumbai University.

Besides the core subjects like Microeconomics, Macreconomics and Econometrics, the students can opt for specialization in one of the three areas – Finance, Data Analytics and Public Policy.

The students undergo rigorous training including 350 hours of classroom teaching, weekly interactions with practitioner economists, internships and live projects, and software workshops. The curriculum has been crafted by Lord Meghnad Desai and practitioner economists from organisations such as the IMF, Wellington Fund, Birla Group, Mint.

Another unique feature of the program is the industry exposure which forms part of the curriculum.  The industry engagements happen through Mentoring, Econ Labs and Speaker Series events. Each student is assigned a corporate mentor for the entire year.  These mentors are MDs/CFOs/Chief Economists of leading oganisations like Aon Hewitt, Goldman Sachs, Reliance, Crisil, IDFC Institute and Exim Bank.

In the Econ Labs, students engage with practitioner economists and in Speaker Series Events, students hear from leading economists, on live topics that are being debated around the globe.

MDAE has also started a Career Accelerator Program with Deloitte where their risk experts are training their students.

India is passing through the post-demonetisation effect now since it was made effective six months back. Do you think it really played an effective role in the Indian economy and also govt's efforts towards taking action against black money menace?

Demonetization is a much-awaited revolution which will change the climate of the Indian economy in the forthcoming years. The true effect of demonetization is still awaited as the country is still evolving as a digital nation. Digitisation is the backbone of this reform step which will further expand the horizon and will benefit the larger population of the country. We have to wait for the final numbers will project the true impact of this massive economic revolution.

The PSU banks in India are fighting against the NPA menace--do you think we need a bad bank to absorb the NPAs leading to PSBs gain better health?

NPAs has raised questions on the entire banking system of India. NPAs are a Gordian knot which the government needs to untangle as soon as possible through a well-crafted policy. Bad banks can create a proper way out for the banks. They can bail out the banks from this mess which was mostly created by some of the most filthy rich businessmen of the country. NPAs are the prodigal sons of politics and business.  People who were once at the helm of affairs are now finding them off guard and desperately trying to hide behind the poor farmers.

Trump's steps towards visa policies have created a furore among IT companies in India. Do you think there are really so many reasons to be worried of?

Trump led government is still in their nascency and they are learning the finer points of the governance and I believe they will soon learn and will make a course correction. Global markets depend on economic and political policies of all the nations of the world and a single imbalance can bulldoze the growth and could destroy the ecosystem of the global economy.