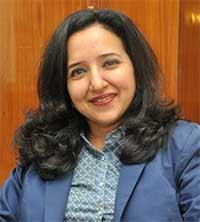 Sangeeta Lakhi has been with Rajani Associates since inception and has been an active partner in the firm's development and growth. She has been recommended as a Recognized Practitioner for Capital Markets by Chambers and Partners while AsiaLaw Profiles and Legal 500 have recommended her as a Leading Lawyer. Lakhi passed her LL.B. examination in 1993 and carries with her extensive experience of 22 years. She has been handling the International Capital Markets practice of the firm since 2004.

Lakhi has recently completed 100 issues of GDRs, FCCBs and QIPs, each of them full-fledged transactions, handled by her. Each transaction has been unique and no one transaction has been the same as the other. She has handled these issues for companies in almost all sectors, whether they are pharma, textiles, oil, manufacturing, service, etc. Lakhi advises corporates in domestic and international (external commercial borrowings) loan transactions, as well as, advance payment supply agreements.

Rajani Associates, established in 1999, is a full-service Law Firm based in Mumbai, India. The firm closely works alongside firms in the US, Europe, Middle East, South East Asia and Australia. Bloomberg has consistently ranked the firm in its Asia ex-Japan DR Issuer Advisers Legal League Tables. Merger Market has consistently ranked Rajani Associates in its M&A League Tables of Legal Advisers to Asia-Pacific M&A. The firm has been ranked amongst the top 14 law firms in India for M&A deals for the year 2014. Also, the organization is ranked amongst the top 40 law firms in India by RSG Leading Law Firms Ranking Report 2015.

Replying to Prasanth Menon of IIFL, Sangeeta Lakhi, Senior Partner, Rajani Associates said, “2015 and 2016 have been significantly good for IPOs and, as such, all the funds/investors thought it fit to exit and as it appears most of the funds/public investors have received a decent return on their investment.”

Post 2011, companies collectively raised the most money via IPO, so far this fiscal. Who has gained from this the most - shareholders or companies?
You may be aware that funds who invest in companies usually demand an exit through the IPO route. Some of the IPOs that we have seen recently are the exits by such funds. In such IPOs, promoters and funds participate through OFS or offer for sale, where the sale proceeds are credited to the promoters or funds and the subscription monies for fresh issue of shares is deposited with the issuer company. The rush of new share sales this year has very little to do with raising growth capital, but with promoters and early-stage investors cashing out. In this year alone, two-thirds of the money raised through IPOs went towards offers for sale - essentially exit for existing investors. Only about a third went towards growth capital. We can say that it is the funds who have gained the most from the recent trend of IPOs, seeking exit of their investments.

What are key factors that have led private equity (PE) firms and investors to exit their investments through the initial public offerings (IPOs)?
The key factors that led to the PE funds and investors to exit through the IPO route are quite clear. Most of the investments were made 5 to 7 years back. The markets are not robust since 2014 due to variety of reasons. 2015 and 2016 have been significantly good for IPOs and, as such, all the funds/investors thought it fit to exit and as it appears most of the funds/public investors have received a decent return on their investment.

There have been about 24 IPOs in 2016. According to you how many successful IPOs will be launched this fiscal?
We believe there should be a minimum of 7 to 10 more IPOs during the balance part of the fiscal year, with retail investors showing interest after the recent demonetisation.

Several companies have failed to access the IPO market after obtaining clearances from regulator SEBI. Could you share the reasons which led to this scenario?
Few reasons why some of the companies after having obtained SEBI clearances have not been able to access the IPO market could be (a) market cap of the company is not big enough; and correspondingly (b) the value of the size of the shares issued to the public is not significant; and (c) in some cases, the sector may not be an attractive sector for the moment.

What challenges do companies face while going for an IPO?
Some of the challenges faced by companies while considering an IPO could be: volatility in the secondary markets and stressed corporate financials, which hurt valuations, making companies reluctant to raise money from equity issues. While investors want a company which is very well positioned in its space and can deliver multi-years of growth, has a quality management team, sound systems and processes in place, robust margins and cash flows to keep performing consistently and is a capital-efficient company, companies struggle to keep up to these expectations, given the poor economic situation. The other challenge for IPO companies is the quick pull-out by foreign institutional investors, on any adverse news, either about the IPO Company or India, in general. The other reason is 'fear factor' amongst investors and corporates. The fear factor is a result of a series of incidents that drove the Indian stock markets into the red. These incidents saw hundreds of millions of Rupees being siphoned by greedy stock market bulls and cunning corporate promoters.

Could you share insights on the mid-year analysis for IPOs in India?
Since mid 2015, there has been no dearth in the IPO market and there has been decent number of IPOs taking place, some oversubscribed by 10 to 15 times or even more and few barely making it on time.  We believe this trend may continue for another 12 to 18 months.

What are the factors driving the capital markets in India?
Some of the primary factors driving the capital market are (a) exit to the existing funds/investors; (b) access to capital market by companies and correspondingly leverage debt (usually in the ratio 2:1).  Beyond a point, the company is unable to service or avail further debt and equity becomes a more viable option. At times, the conditions imposed by funds/investors, in particular, the return on investment is quite steep and as such, IPO becomes a viable option to provide exit to the funds.  No doubt, listing means compliance but on the other hand, it opens many more doors to mobilise funds and gain recognition.

What is the impact of central government’s push to ease of doing business in India on the IPO market?
Government has been constantly pushing "doing business in India" and with recent liberalisation of FDI Policy and certain more investment opportunities in the unlisted companies space, coupled with the ongoing exemption on capital gains tax on sale of listed securities are all key factors to promote IPOs.  The recent relaxation for foreign institutional investors has also driven the IPO markets, such as FIIs have been permitted to invest in unlisted securities and corporate debts. As stated earlier, while a company and shareholders do enjoy the benefits of listing; the promoters become vulnerable to strict compliance, which naturally brings in discipline and corporate governance.

How do you see the IPO market evolve in FY17? What are your expectations?
We expect the IPO to continue to evolve during FY 2017. Hopefully, the retail investors will find investments in capital market directly (or through mutual fund) a better option to invest, rather than deploying their funds in debt instruments, since the interest rate is likely to reduce or invest in real estate which has remained significantly flat for some time or invest in precious stone/gold which does not provide adequate returns.