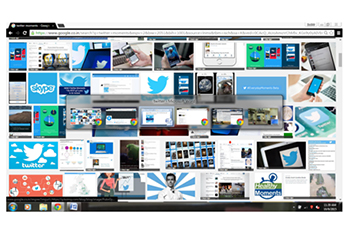 The new feature, apparently a knee-jerk innovation seeking to reverse the dwindling user base, seems strong enough to steer a Twitter renaissance. The velocity of its evolution and the veracity of its value proposition will decide whether it rocks Wall Street or hits the wall.

Moments is Twitter’s gargantuan hope to make it more compelling to the world at large, more to the significant non-user community than the loyalists who have stuck with it amidst the chaos and controversy of recent times. Believed to be a progression of an in-house initiative called Project Lightning steered by former CEO Dick Costolo, Moments, launched only for US users as of now, is essentially a tab represented by a lightning icon, a tap on which takes you to a ‘Today’ view which is a directory of each day’s key happenings as perceived by Twitter’s editorial team in the form of cherry picked tweets – a blend of text, images and videos. The Moments diet would be comprised of content from Twitter and Twitter-owned buckets as also feeds from third party providers.

A marked departure from the Twitter legacy is the ability to add a moment of choice to one’s timeline which stays put only till the topic is topical – only while the moment is reckoned as a moment on Twitter. This would mean a lot to the fatigued user who wouldn’t need to ‘unfollow’ it unlike what one needs to do with normal feeds. Apart from the 'Today' view, there would be sliders for fairly self-explanatory categories viz. News, Entertainment, Sports and Fun. With Moments, Twitter gives you its curated choice which you can narrow down further based on your own choice. Add forthcoming value-adds like user-curated content and it sounds like a phenomenal transformation in principle but much would depend on the speed and quality of the Moments evolution. To begin with, wish they had named it something else given the fact that Facebook has its own Moments. Agreed that one is a different species – a photo sharing app – but mindless comparison is inevitable – especially by non-users who, in any case, don’t feel the need to know better when it comes to Twitter. Sad but true!

Can Twitter manage to make Moments the smartest web-n-mobile news navigator? Today’s nomadic user is spoilt for choice when it comes to news congregation but the supply-side abundance doesn’t necessary create demand-side value. Print is down, if not out, for obvious reasons including its thinning credibility and inconsistent digital initiatives. Of course, there’s no dearth of search engines, networking platforms, and messaging and photo sharing applications vying for market share, yet there’s no clear winner as yet to guide the user on ‘what to see’ before he/she zeroes in on ‘what to read’. Twitter could deliver this value prop if it plays its cards well. It already has a fertile playground for stories in the form of worldwide tweets; Moments can help cleanse it by obliquely quarantining the litter of the hashtag heap. But much would depend on the credibility of Moments in ensuring a steady stream of impartial and factual news. It’s but obvious that Twitter’s traffic boost drive would be linked to revenue generation sometime very soon. Once advertising comes into the picture, the bland commotion of brand promotion could prove to be an eye sore in ‘Momentsphere’. Twitter must somehow find a way to work around this tousled issue since, ironically enough; advertising would remain a key nutrient in lending momentum to Moments.

Maybe Twitter can urge brands to get more creative in presenting some advertisements as plausible stories. Maybe Twitter can nurture a parallel channel on Moments for neutral posts by content curators who are neither from Twitter, nor from value partners. There’s a lot to do since there’s a lot at stake. For long, Twitter has failed to measure its humungous potential, choosing to remain a miniscule bonsai of the magnificent tree it could have become, through its ridiculously insular focus on 140 characters. Whether 140, 1000 or 1400, limits will prove only limiting if Twitter doesn’t build character. ‘Moments’ is one way it could. If it does, the surname Dorsey might just become synonymous with Jobs, else we would be left comparing 'apples' and oranges with Jack back to ‘square’ one. (No pun intended!)