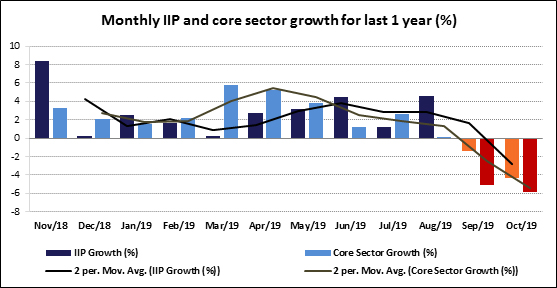 In the minutes of the MPC of the October meeting, the 6 members of the MPC had clearly emphasized that the rate cuts would continue till the growth variables at least showed green shoots of recovery.

The 3-day meeting of the Monetary Policy Committee (MPC) commenced on December 03, 2019 and will conclude on December 05, 2019, culminating in the announcement of the fifth Monetary Policy of the current fiscal year 2019-20. In the minutes of the MPC of the October meeting, the 6 members of the MPC had clearly emphasized that the rate cuts would continue till the growth variables at least showed green shoots of recovery. The macro data has only become less attractive in the subsequent months.

When the government announced its September quarter GDP at 4.5%, there was actually a sense of relief. Most estimates had pegged the expected GDP growth for the September quarter at closer to 4.2%, with some pessimistic estimates even going below 4%. The GVA growth of 4.3% clearly indicated that the growth could have been lower had it not been for the liberal dose of government sponsored services.

Even within the GDP mix, it was services that managed to do better. Agricultural growth fell from 4.9% to 2.2% while manufacturing growth fell to (-1.1%). That clearly calls for a more dovish rate stance by the RBI. The bigger worry for the government could be on the full year GDP estimates. CRISIL has pegged full year growth at 5.1% while Goldman Sachs has pegged the full year growth at closer to 5.3%. With first half growth at just 4.75%, the economy will still have to grow at closer to 6% in the third and fourth quarters to get closer to the 5.3% mark. That is where the high frequency data is not in tandem.

When we refer to the next two quarters, the real concern stems from the high frequency data like the monthly IIP and the core sector numbers. The core sector constitutes 42% of the IIP, and hence, it is hardly surprising that the moving averages have moved in tandem. But, the real worry is that both these high frequency numbers have dipped deep into negative territory in the last two months.

While the GDP will be the guiding principle for the overall monetary policy direction, the specific rate call will be taken based on the high frequency data points like IIP and core sector numbers.

What the RBI could be doing in its December policy?
The market has already factored in a 25 bps rate cut in the repo rates and that was also evident in the subdued 10-year bond yields as well as the recent weakening of the rupee. Obviously, the markets would be expecting a positive surprise like the August policy where the MPC cut rates by 35 bps instead of 25 bps. However, at the current level of 5.15%, the repo rates are almost at the same level they were in 2003. The rates have never been so low in the 20 years (excluding the brief period after the global financial crisis of 2008-09). Thus, a rate cut of 25 bps to 4.90% looks the most likely scenario. Here are four things that the MPC is likely to focus on.

The RBI also realizes that rate cuts alone are doing little to improve growth; considering that rates have been cut by 135 bps in 2019 and by 285 bps since early 2015. One can look for a more concerted approach that combines fiscal measures and tighter monitoring of banks to pass on lower costs to borrowers. That is surely going to be a lot more effective!