Read Full Story
If the budget was so good then why were the stock markets doing so badly? The other way to look at is that the Union Budget 2019 is not just about stock markets. Arguments apart, for the capital markets the Sensex and the Nifty are the ultimate barometers of whether the budget was good or bad. Markets have fallen sharply post the Budget announcement on July 05th. 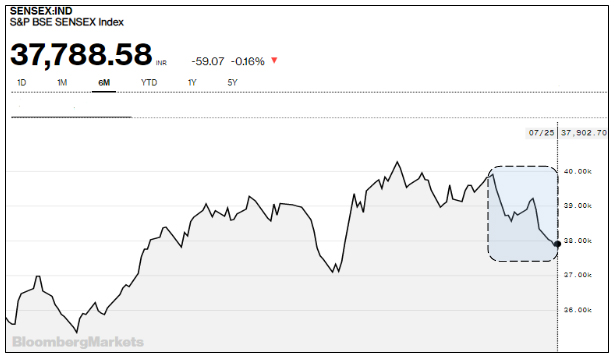 As the shaded portion in the chart shows, the fall in the Sensex after the budget announcement has been really sharp losing over 2200 points. Of course, one can argue that there was a huge rally and a wall of expectations built up ahead of the Modi government getting re-elected. But, that is only part of the story. The reality is that the budget had some announcements which were against the basic grain of what markets were expecting; at least conceptually.

1. If FIIs are driving the market, why not be fair and accommodative to them?
This is one question a lot of foreign investors are really asking the government. Back in 2012, the government introduced the General Anti Avoidance Rules (GAAR), which opened up the spectre of retrospective taxation on Foreign Portfolio Investors. Over the last few years, the provisions of GAAR have been substantially diluted and are no longer a primary concern for the FPIs. However, Budget 2019 has added a new worry for them.

Most of us are aware that the Budget hiked the income tax surcharge from 15% to 25% for incomes above Rs2cr and up to 37% for incomes above Rs5cr. What was innocuously inserted was a clause that these provisions will also apply to association of persons (AOPs). That would straight away bring all the trusts under the ambit of higher surcharge payable. The problem was that nearly 40% of the FPIs registered in India operate as trust structures since it is a lot simpler. Only the balance 60% is structured as corporates. This does not impact corporate structures but FIIs structured as trusts will now have to pay steeply higher rates of tax due to the enhanced surcharge.

Finance Minister has offered a solution that all FIIs can convert to corporate structures. But that has two roadblocks. Firstly, it is not clear if any such conversion will attract capital gains tax on conversion or not. Secondly, it is already established that any change of structure purely for tax saving will automatically attract provisions of GAAR. There is too much ambiguity and FIIs are thinking with their feet, selling $1.7 billion since the budget.

2. Buyback tax – Throwing the baby with the bathwater
One of the basic philosophies of any government is to plug tax leakages and that is normally done by removing arbitrages. Now here was the arbitrage! Union Budget 2016 had imposed a special additional tax of 10% on dividends above Rs.1 million per annum. To escape the tax clause, scores of cash-rich companies opted for buybacks. Buybacks rewarded shareholders without worrying about dividend income tax or dividend distribution tax. Between 2016 and 2019, the volume of buybacks was up 10-fold. To plug the arbitrage, the government imposed a tax of 20% on buybacks which has not gone down well with the stock markets.

Firstly, it blocks cash rich IT companies from rewarding their shareholders via buybacks. Not only promoters but minority shareholders also benefited from buybacks. Secondly, the buyback tax will be levied at 20% on the difference between the buyback price and issue price. So, even a person who had bought the stock recently would end up paying a huge buyback tax. That will literally kill buybacks. Lastly, the government is shooting the messenger. Multi level tax on dividends is wrong to begin with. Instead of scrapping that, the government has gone ahead and taxed buybacks too. Not surprisingly, markets are disappointed.

3. Risk of too much liquidity in the stock markets
The Union Budget 2019, in all probabilities, wanted to help out the stock market with more quality liquidity. But then, markets have their own way of interpreting things. Two measures were well thought out but not well thought through. Firstly, the government announced a proposal to increase public shareholding from the current 25% to 35%. That will mean that largely promoter held companies will have to gradually dilute their stake. According to an estimate made by ET, this would impact scores of closely held companies and lead to fresh shares worth nearly $30 billion coming into the stock market. Secondly, the budget also announced its intention to dilute to minority government holdings in PSUs. Too much paper is not a good idea for prices and that also caused a sharp correction.

4. Pampering the banks but not the corporates
PSU banks had some reasons to celebrate as the budget announced a recapitalization plan worth Rs70,000cr. However, large Indian companies were not too pleased as the much anticipated corporate tax cut did not materialize. The Finance Minister’s statement that the hike in lower tax threshold would cover 99% of the companies was quite rich. She only spoke about the number of companies not of the quantum of profits or value of left out companies. This was a major disappointment for corporate India.

5. A lot of bad things from past budgets have stayed on
The situation for equity investors has been getting progressively tighter. STT continues but LTCG tax on equities was introduced in Budget 2018. Equity funds were being taxed without indexation benefits and equity fund dividends are also subjected to DDT. It was hoped that, at least, some of these measures would be rolled back in Union Budget 2019; but nothing was done. That actually disappointed the markets.

Perhaps, these short term hiccups will make the markets strong in the long run. Proponents of this idea should remember what Keynes said, “Markets can be irrational much longer than investors can remain solvent”. That is the worry!