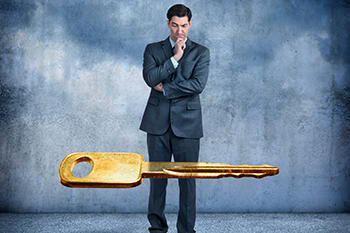 “All of the financial decisions that I have made in the past, whether right or wrong, have made me a financially conscious person. I learned these things the hard way” says a 40 year old businessman, who has been through the ups and downs of financial management. He highlighted the following financial regrets in a free wheeling conversation with IIFL.

Short-term happiness has hurt long-term comfort
Many times, I spent more than what I earned for a particular month. I failed to distinguish between my wants and my needs due to easy financing options and plastic money. I was splurging on unnecessary luxuries like frequently changing my mobile phones, lavish outings, availing more private transport than public transport. These expenses have cost me a large part of my retirement wealth.

I recall an equation suggested by Warren Buffett “Income ­ Savings = Expenses”, which suggests that one should keep aside savings first and then spend the rest of income. If I had implemented that earlier, current situation would have been a lot better.

I didn’t take my credit card bills seriously
The second mistake that I made was paying just the minimum amount due every month and not making entire outstanding payments on time. Paying just the minimum amount attracted a lot of interest (30% per annum) and I ended up paying a whole lot more than I was supposed to. Late payments not only attracted penalty charges, but they also affected my credit score. A low credit score also made it difficult for me to get a loan or a higher credit limit later.

Lending money to friends and relatives
When I was young, I had few friends who would frequently seek my financial help. Such a lending did not generate any value for me over the years. In fact, a majority of the lending ended up as bad debts. More interestingly, one of those friends used my money to invest in a valuable property and he, instead of me, enjoyed its capital gains later.

Taking lower risk with investments
I was aware that higher the risks, higher would be the returns, but I failed to capitalize on this motto. I hesitated to take high risk initially and planned to invest in fixed deposit. So, I invested Rs 5000 in recurring deposits at 7.5% at the age of 25, through which I created a total wealth of Rs 16.6 lacs by the age of 40. If I had invested in a SIP of Rs 5000 in an equity fund with expected rate of return of 12%, which carried a higher risk, I would have ended up at a lump sum amount of Rs 25.2 lacs presently.

Short term investments in stocks
I used to treat equity investments as a short-term high-risk avenue rather than an opportunity to create wealth in the long-term. I often lost my nerve when the markets tumbled. But serious money could have been made by investing in stocks when there is pessimism in the market. In November 2008, during the global financial meltdown phase, I bought TCS shares at a price of Rs 209 and did not hold it long enough. After the 1:1 bonus in 2009, that one share is now worth an almost unadjusted price of Rs 2,142 (annualized return of 40%).

Delayed investing
At a young age, I believed in spending more than saving. I started planning for my retirement after 15 years into my career. This was my most regretful decision. I had started a SIP of Rs 5000 in an equity fund that gave a return of 12% at the age of 35. Now, at the age of 40, I have created a wealth of Rs 4 lakhs. If I had started this investment at age of 25, I would have ended up at Rs 25 lakhs. My cost of delay is Rs 21 lakhs till now.

I didn’t start investing early due to low income, but I still could have managed to invest a small sum from my income. The magic of compounding ensures that even a small sum grows into a lumpsum amount over a long term. The investment could have then been scaled up as the income grew in the coming years. 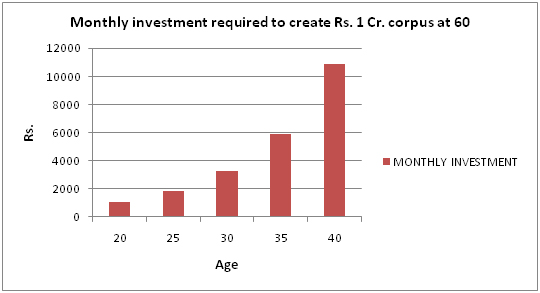 In the above graph, we observe that as the age passes you have to pay more to create a required corpus for retirement.

Proper asset allocation
Rebalancing is necessary because the returns from different asset classes can vary. If I had reduced my equity exposure when the markets were making new highs in 2007, my portfolio would not have lost value in 2008. Similarly, I did not reallocate my assets into equities after the crisis. Those who did, made good gains when the markets bounced back in 2009. If I had rebalanced regularly, I would not have had any regrets.

Now when I ponder on my past, I regret these 7 financial planning mistakes. Only if I would have realized it sooner, my current situation would have been a lot better. Going forward I am confident on not repeating those mistakes again.

The author, Rajas Pendnekar is a Blogger at IIFL.