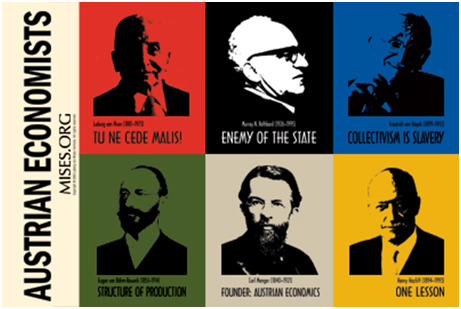 The individualism of the Austrian economic thought – call it methodological or plain logical - deserves acknowledgment ahead of analysis. Far from blind worship or brutal dismissal, we also need to collectively enhance the import of this non-conformist philosophy whose presence is more important than its predictions.

Picture Courtesy: www.hayek.sk
The Austrian ‘coffeehouse’ city of Vienna is best known for the legendary neurologist Sigmund Freud whose folklore reputation as the father of psychoanalysis has not been shaken even by the posthumous rejection of most of his theories. But for the Austrian school of economics, no less Freudian in import, a few of its debatable beliefs have unfortunately made a serious dent into the veneration it so richly deserves.

There’s no doubt about the fact that all social behavior is the result – whether subtle or obvious - of individual beliefs, dispositions and circumstances. That there is a thin line between governmental intervention and governmental interference is also not hard to concur with, so is the argument that raw data and mathematical models are effective analytical tools but certainly not ready-to-wear substitutes for thought. And we instinctively agree that any emblem of public good – whether an academic institution or a healthcare organization – need not be a government prerogative by default.

And when it comes to the subjectivity of individual psyche and response to events, we all have a fair idea of the possible hues and colors and how they can belie even the most perceptible economic projections. How higher prices need not always curb demand, how the ostentation effect may enthuse the poor to defy adversity, how common investors often get stuck with high-priced stocks lured by market swings, how citizen responses differ from geography to geography, from culture to culture and from time to time. That there’s very little scope to predict the strange liaison between individual reactions and collective responses is well known.

But when all these obvious truisms come packaged as Austrian School, at times a tad more vociferously than necessary by some of its aggressive practitioners, they immediately meet with stiff opposition from those mainstream quarters invariably keen to launch an impugned attack. A crucial debate is then unknowingly reduced to a silly Objectivity Vs Subjectivity tug of war knowing rather well that real life is an intricate mix of both realities. Individual non-conformity often has a say in herd mentality and vice versa but economic generalizations hardly take cognizance of this fact.

This piece is not a prescriptive essay on the Austrian school. It rather argues against that black and white positions are wholly extraneous in the context of such critical debates that are likely to help the larger cause of Economics.

Needless to say, there’s a lot about the Austrian school that makes you wonder about the logic of its theory and unassailability of its practice. You may strongly detest the Austrian belief that all governmental interventions are necessarily uncalled for at all times, you may dismiss their ‘malinvestment’ theory, you may even find many other assumptions simplistic but why should your reservations take the form of outright dismissal. The boorish manner in which opponents of the Austrian school across spheres spiritedly gang up to launch an all out attack simply gives away their political agenda. And the quality of the Austrian school retaliation leaves a lot to be desired.

In the context of rightsizing the Austrian thought for the right reasons, our economist friends can take a leaf out of Bryan Caplan’s book. The 43-year old American author-economist presents a neat case against the Austrian school’s assumptions, not against the school itself, in his paper titled ‘Why I Am Not an Austrian Economist’. Of course, Austrian school detractors view this incisive document only as their potent ‘attack weapon’ while subtly cornering Caplan as a former Austrian school sympathizer but that hardly takes away the substance of Caplan’s argument.

Caplan begins with a heartfelt acknowledgment of the Austrian contribution and of his initial faith in and fascination for the school’s conviction. He calls his ensuing disagreement a sequel which is a welcome departure from the usually arid academic arguments that invariably tend to erase lyrical trysts from clinical post mortems.

Caplan points out the haste and inadequacy of the Mises and Rothbard rejection of the foundations of modern neoclassical economics. In attacking the utility function describing individual preferences countering it with the value scale approach, he contends, Rothbard erroneously divides utilities as quantities (when they are only ranks) and accuses neoclassical theory of assuming cardinality where it clearly doesn’t. In effect, while neoclassical economists are able to logically decipher the income and substitution effect of price changes, Rothbard’s derivation seems adhoc, thanks to the restrictive nature of his value scale postulate.

Caplan challenges another Austrian assumption in rejecting the neoclassical indifference curve theory: that no preference can exist which cannot be revealed in action. Caplan calls it ‘a peculiar importation of behaviorism into a body of economic thought which purports to be militantly anti-behavioral?’ Caplan further states: ‘Just as there is more to my action than my behavior, there is more to my preferences than my action… one can only observe that I choose a green sweater; but this does not rule out the possibility that I was actually indifferent between the green sweater and the blue sweater.’

Caplan goes on to point out many more Austrian flaws and inconsistencies under suitable heads – the unruly attack on the assumption of continuity that seeks to render the application of calculus redundant in economics, the unreasonability of Rothbard’s welfare economics and proprietary  claims over subjectivism, overuse of the economic calculation agreement, pros and cons of the Austrian Business Cycle theory, weak premise of the malinvestment theory, and the extreme disdain for the expressive language of modern economics, i.e. Mathematics and Econometrics, notwithstanding the empirical evidence of its negative contribution over the years.

Citing Rothbard’s elucidation of the numerous ways in which the government creates monopoly as one of his greatest achievements, Caplan agrees with Rothbard’s views on the maintenance of market monopoly and the wrong-headedness of forcefully imposing perfect competition given the presence of factors like economies of scale and taste for variety. Caplan feels Rothbard should have acknowledged the obvious drawbacks of imperfect competition in the same breath before ‘pointing out its numerous attendant advantages.’

Hailing the work of Lawrence White and George Selgin on free banking and monetary issues, he highlights the meta-economic fixation of the Austrian school which, though doesn’t make for a purging case, raises fundamental questions about its longevity, nay legitimacy, detached that it is from the living waters of economics. He urges Austrian economists ‘to give up their quest for a paradigm shift and content themselves with sharing whatever valuable substantive contributions they have to offer with the rest of the economics profession - and of course, with the intellectually involved public.’ Now, is this not a dignified way of putting forth one’s argument? You may concur with the views but there is no insistence in the first place. Wish Economics is blessed with more Caplans in the time to come.

If the Austrian school scholars disagree, they are still free to claim the paradigm shift but even otherwise their priceless contribution is never dismissed. It still remains a coffeehouse of cherished consequence. But let their argument be convincing, not counterproductive. They can’t take a Freudian stand of “no cure” in advocating their ‘subjectivity’ case. Some amount of neurosis in everyday life is acceptable only in psychoanalysis, not in Economics.

In any case, refining the tenets of Austrian economics is part of the larger cause. Whether Austrian or Australian, academicians and practitioners need to rescue the subject from the deepening eddy of mistrust that feeds the growing belief that Economics is only a pseudo science rooted in political purports rather than scientific postulates. For a change, why can’t warring factions gang up in a healthy debate focused on functional solutions, not factional positions? Else, how do we cope with the complexities of economics where exactitude is only an approximation at best, and, aberration at worst? Wish economists across tribes and tributaries allot more room to introspection, grace and humility in their intellectual escapades while unanimously showing politics the door. No point closing the barn door after the proverbial horse has bolted.

US Q2 GDP contracts 0.6%, but lower than estimated