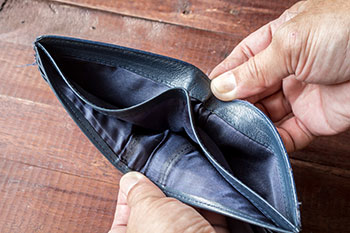 Tragically, it is the ultimate betrayal of Prime Minister Narendra Modi by our bankers. The greed and selfishness is staggering and the connivance wide spread. The nub of the scandal does not lie elsewhere - it is centred in our banking system and the extent to which it has been compromised. What hope is there for ordinary folks in this country to expect that corruption will be greatly reduced? How is any change possible if well paid bankers behave worse than loan sharks? What can be said if a large number of our people remain steadfast in dodging tax and find willing accomplices in a highly regulated industry?

The cash deposit counters are ringing at banks all across the country. A deluge of notes has flown into the banking system - altering many of the initial beliefs and assumptions about the quantum and extent of tax-evaded cash in our society.

The final numbers of how much of the demonetised currency has been deposited into regular banking channels and what is not will come out in due course. Clearly, the quantum of the deposits has taken the government, the banking system and the people of this country by surprise. As of now, even the basic count is suspect.

This in turn has raised questions about the design and objectives of the demonetisation scheme - with a bulk of expert opinion left wondering about the ultimate result of this radical experiment. Short of amending the legislation that governs the central bank of the country (and the system of currency issuance and consequent liability); the likelihood of a large ‘cash’ surplus accruing to the government balance sheet remains distant.

With the main premise of a large cash surplus almost discredited, by none other than Reserve Bank of India governor Urjit Patel, it is clear that a determined push is being made to encourage cashless transactions. The short term adaptation of our society seems to buttress this push - there has been a massive increase in electronic payments of all kinds. It is also evident that ordinary folks want to adapt to this new order - out of necessity as well as in the spirit of the moment. A surge in financial inclusion is underway as many more open bank accounts, register with mobile wallet companies, try their hand at Aadhaar linked banking, or even text message based mobile payments.

Yet, cash isn’t going away anytime soon. The lure of paper currency remains and is unlikely to be fully replaced with the ‘soft power’ of a credit or debit card. This is a structural truth of our economy-a heterogeneous mix of earning and spending patterns, linked closely with levels of basic literacy and the nature of corruption that bedevils our nation.

Make no mistake - corruption persists in our society. While it is easy to blame the demonetisation policy for defects and the bureaucracy for its unimaginative implementation, the starkest reminder of the extremely high levels of corrupt behaviour is to be had from the vivid photographs and video footage of bundles of new currency discovered by authorities all across the country.

The amounts of cash seized are far in excess of what could have been legally withdrawn in the last four weeks from our banks. Remember, even the amount of money made available to individual branches has been rationed.

Dozens of bank staffers – both in the public as well the as in the private sector - have been caught helping launder demonetised currency. What has been seized so far must be only a very small fraction of what would have been laundered by now.

The hub of the scandal does not lie elsewhere - it is centred in our banking system and the extent to which it has been compromised. What hope is there for ordinary folks in this country to expect that corruption will be greatly reduced? How is any change possible if well paid bankers behave worse than loan sharks? What can be said if a large number of our people remain steadfast in dodging tax and find willing accomplices in a highly regulated industry?

The perfidy demonstrated inside the banks, even as the public was patiently standing in long queues outside, is painfully evident. It is India’s very own Lehman moment - a crisis brought upon by rapacious bankers. No wonder that our banking system is reeling under unpaid dues!

Tragically, it is the ultimate betrayal of Prime Minister Narendra Modi by our bankers. The greed and selfishness is staggering and the connivance wide spread. It is this betrayal that led Modi to warn that those who facilitated this crime of laundering money at bank branches would not go unpunished.

It may take several months for all those involved to be caught and punished. It may take longer to realise penalties from tax dodgers. It will take as long, if not longer, to repair the damage to the real economy and remonetise India.

What will take the longest to repair is the extreme sense of disappointment and disenchantment that is palpably visible in the public due to the laundering of cash by evaders and corrupt bank staff. This is what has dismayed the citizenry the most. It has also disheartened people about what to expect about the promise of eradicating corruption from our country.

The public is increasingly coming around to the view that a massive amount of the defunct currency has been successfully laundered - to the detriment of honest, hardworking folks - and that corruption will remain endemic in all layers of Indian society. The rich will remain rich, the poor where they are. A small percentage of the corrupt may be eventually caught but a vast majority may escape the strong arm of the law.

This needs to be addressed immediately. A massive cleanup is necessary. For starters, it is not just branch level staffers who need to be taken to task. It is the higher levels of bank management who need to face the music - for a scam of unprecedented magnitude has been perpetrated under their watch. When the head of the railways minister is demanded every time an accident takes place, why should the top management of banks not face the strictest action when their establishment is found to have been a willing accomplice in laundering?

Most avenues of corruption arise out of ‘big’ government and the nexus between those who ‘seek’ favours and those who are in a position to ‘grant’ them. This is exactly what has panned out behind the shutters at bank branches these past four weeks.

Unless an example is made of the bad fish in our banks, the mild gains in the fight against corruption would be wiped out and all come to naught.

The old order has been replaced - a new currency is born. The king is dead, a new one minted. The practice of corruption remains - the dynasts of fraud continue to deal in currency - one that is only smaller in size, but double in value. The nation bleeds red, only the shade is pink.