x
Home » Top News » Do you have these Avengers stocks in your portfolio? 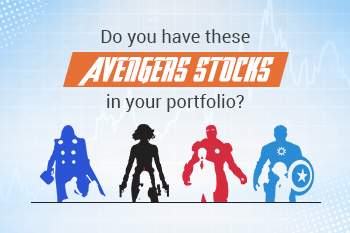 Do you have these Avengers stocks in your portfolio?

You obviously do not want a Thanos, the evil demigod who may be just too hot to handle. Let us look at the Avengers analogy and how specific stocks fit into the Avengers story.

As the Russo Brothers release their star studded Avengers Endgame on April 26, 2019, it is time to reflect on the Avengers in your portfolio. You obviously do not want a Thanos, the evil demigod who may be just too hot to handle. Let us look at the Avengers analogy and how specific stocks fit into the Avengers story.

Captain America – Is that Bajaj Finance?

Have you ever wondered about the symbolism of Capitalist America? In a way, Captain America represents the great American dream. As the first avenger, he symbolizes freedom and protection. He stands up for the little guy and has a clear code of conduct. If you look at your portfolio, is that not what Bajaj Finance has been all about. For millions of Indians it has made finance accessible with simplicity and low cost. It is about the freedom to spend today without compromising your financial position. With its vast reach, Bajaj Finance has emerged as your friendly banker who cares. But its low level of NPAs also tells you that they know their job. Surely a worthy analogy for Captain America!

Iron Man – That has to be HDFC Bank

The character of Iron Man has been synonymous with Tony Stark, but have you wondered what the quality that Iron Man represents is. Iron Man is not only an ideal symbol of what capitalism should be but also shows the best confluence of money and technology. What is the name that comes to your mind when you juxtapose this to the Indian capital markets? Surely, HDFC Bank looks the best fit for the Iron Man. With its focus on cost of funds, tight control over asset quality and innovative use of technology, HDFC Bank represents the qualities that all banks aspire to be. Of course, nobody who bought HDFC Bank and held on for a longer period has lost money. That is capitalist value for you.

Black Widow – Is that ICICI Bank?

The Black Widow represents energy and creative force, especially feminine power. Not to forget that a lot of innovations in Indian banking were actually triggered by the creative energies of this bank. They may have had problems along the way in terms of asset quality but their contributions from online banking to ATM networking to retail lending cannot be denied. Few banks or companies have produced as many star women managers as ICICI Bank has. You have got to give them the credit they deserve.

Thor – Does it represent RBL Bank for you?

The character of Thor is based on the Norse deity of the same name and is used to represent the Asgardian god of Thunder and symbolized by the enchanted hammer. Thor has this unique advantage which enables to hold his own even amidst other super humans. If you look in the capital market context, RBL Bank comes closest. In a short span of time, RBL has not only shown growth, consistency and asset quality, but also gets valuations that are the envy of most other banks. Like Thor, the bank has been able to spring surprises despite being much smaller than its competitors. It could be the X-factor to watch out for.

Hulk – Who else but Reliance Industries!

Nothing in the Avengers movie represents transformation into a powerhouse better than the green skinned Hulk. Be it the exposure to gamma rays or the emotional stress issue, Hulk represents the best of transformation into a powerful entity. Nothing in the Indian market represents this characteristic better than RIL. A company that started off as a textile unit but transformed into a fully integrated hydrocarbon giant. In the process, it also created billions of dollars of wealth.

Hawkeye represents a hero on numerous occasions. In a way, Biocon comes closest to that description. Despite representing the much in trouble pharma sector, Biocon has come closest to being the best pharma performer in the last few years.

Go ahead and get the Avengers into your portfolio!