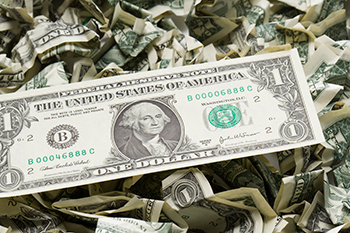 It is not often that you get to see the foreign portfolio investors selling $2.5 billion worth of equities in 3 weeks flat. Normally, such a move would have led to a sharp correction in the rupee but the redeeming feature has been that FPIs are still buying into debt. That has probably kept the rupee/dollar equation in balance. Why the selling by FPIs and why Indian markets really need to worry about it?

FPI selling in July – A case of no respite
The FPI action in July looks like a stark contrast to what we saw earlier this year. Between January and April 2019, FPIs infused close to Rs70,000cr into Indian equities of which 80% of the flows came in the month of March alone. Those were the heady days! Pre-poll surveys were predicting a thumping return for the NDA government, a continuation of the reforms process and a more conducive environment for FPIs. Suddenly, the September 2018 circular urging FPIs to share more details of their sub-accounts and ultimate beneficiaries was sweetly forgotten. So, what changed in July? First the numbers. 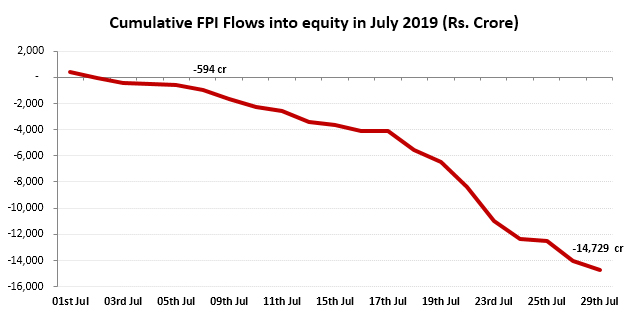 The above chart captures how the FPI selling accelerated post the Union Budget and FPIs have been net sellers on each trading day after the Union Budget on July 05th. Aggressive selling to the tune of $2.2bn does not happen without a strong reason. And, reasons, there were!

Why the Budget 2019 spooked the FPIs?
The foreign investors had actually built major expectations ahead of the Union Budget. Most FPIs were expecting reformist noises like cut in corporate tax rates, spending on infrastructure, more friendly tax regime for foreign investors, etc. However, 3 announcements in the Budget changed the sentiments of the FPIs.
It was a combination of these three budget announcements that actually hit FPI flows into India in the month of July. But there is a larger macro issue which is probably getting glossed over in the brouhaha over FPI tax.

Fiscal deficit is much bigger than it is made out to be
Over the last couple of weeks, the CAG report has caught the attention of FPIs. The CAG report has pointed out that if the off-balance sheet items were also considered (as they should be), the actually fiscal deficit for 2017-18 would be closer to 5.85% of GDP rather than the 3.4% of GDP that the Budget document presented. Here is why.

Above all, FPIs have a choice in relative terms
At a more fundamental level, the fact is that FPIs have a choice between a cross-section of emerging markets to choose from and the choice is made in terms of risk adjusted returns. Here is a valuation comparison for a quick dekko.
Data Source: MSCI

Clearly, there is a fundamental valuation disadvantage that a lot of FPIs, especially the passive macro investors, are beginning to see in the Indian context. The Budget has also toned down expectations on GDP growth and the fourth quarter was as low as 5.8%. That is perhaps keeping FIIs watchful with respect to the Indian markets!