x
Home » Top News » France vs. Croatia – Who will cross the final frontier at Moscow? 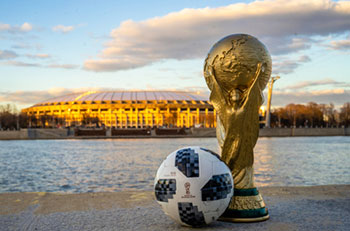 France vs. Croatia – Who will cross the final frontier at Moscow?

After a high pitched battle for over a month, we have two European nations that will clash on Sunday, July 15, at Moscow to decide the first among equals. Both have beaten tough teams along the way.

Croatia beat the feisty Russians in the quarter-finals and then beat fancied England in the semi-finals.

France, on the other hand, had a comfortable win over Uruguay in the quarter-finals but was tested to the hilt in the semi-finals against Belgium.

Interestingly, the two countries could not have presented a starker contrast. The French bring to soccer a kind of Mediterranean flair and speed which sets them apart.

Croatia brings a strong Slavic determination to their game. France has a rich and continuous history of several centuries, whereas Croatia is a little over 25-years-old, born out of the splintering of erstwhile Yugoslavia in 1991.

Broadly, there will be 4 factors which will determine the winner on Sunday, July 15, 2018.

1.      The team that plans the day better will take the day

Like your investing activity, your soccer game has to also be planned to a ‘T’. If you observe the French game and the Croatian game in the last three qualifiers, one thing common is a detailed plan before each game.

In the game against Russia, the Croats had sensed that they would stand a better chance if they confused the Russians. Even during the shootouts, the focus was entirely on their kicking, knowing fully-well that a tired Russian team was likely to slacken.

Planning has been the forte of France too. The first qualifier against Argentina saw France come back from 2-1 down to make it an unassailable 4-2. It was about planning. Sensing that the Argentines had let down their defenses, they outflanked a team that was still overly dependent on Messi.

On Sunday, a lot will depend on granular planning, including the relative strengths and weaknesses of each and every player.

2.      An ability to switch between consistency and aggression

Both Croatia and France have shown the ability to switch between aggression and consistency at very short notice.

Take the case of France versus Belgium match. Belgium, until the end, had a higher ball possession rate. France just decided to tighten their defenses and let the Belgians tire themselves out. The moment the Belgians slackened, France was quick to put their stamp with a header. After that, the focus was entirely on consolidating their position.

Croatia did a similar strategy against England. Despite England being 1-0 ahead, the Croats oscillated between consistency and aggression based on the situation. By the time the match went into extra time, Croats clearly had the edge; both physically and psychologically.

3.      A team approach will work better than a star approach

France, once upon a time, relied heavily on star value. Michel Platini, Deschamps, and Zinedine Zidane were larger than life personalities and had dominated French soccer over the last 35 years. The current team may have an odd Griezmann or Mbappe but the focus is still on playing a team game of passes and assists. That is what makes this French team so different and powerful. They have actually learned the power of team-play and that makes them dangerous. They are a well-knit side and almost reminiscent of the 2002 Brazilian side, which took the World Cup in South Korea.

Croats have really exhibited high-quality team game in the last one month. There could be an odd Modric who appears to be larger than life, but the remaining players would slip into any crowd before you can spell their name. It is this typically self-effacing attitude of the Croat team that makes them very dangerous on the football ground.

4.      Capturing the tipping points will finally make the difference

On the parameters of adaptability, planning, and teamwork, both the French and Croats appear to be on par. So, what will make the difference on Sunday?

The team that captures and capitalizes on these tipping points better will be the winner on Sunday.

How about a final takeaway for your Monday trading?

A lot of us will try hard to predict the winner of the final and mistake luck for skill. Don’t make that mistake when you start trading on Monday after the FIFA finals.

Remember, planning, adaptability, and a holistic approach is what will help you in your trading.

Above all, capture the few moments that matter! That could be your biggest takeaway for trading on Monday.

Both teams appear to be well-matched in almost all respects. Anybody who really believes that they can predict the winner of the FIFA 2018 has got to be a liar or has got to be God. Unfortunately, we are neither!