x
Home » Top News » Gold Monetisation – Will it have a Midas Touch? 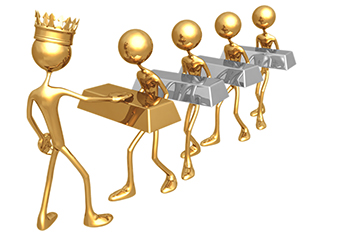 Gold Monetisation – Will it have a Midas Touch?

India’s endeavour to monetise gold seems to be a noble motive, aimed at channelizing idle household gold holdings in to financial savings. Although the scheme can provide a boost to certain sectors of the economy, there are structural impediments which question the much needed efficacy of the plan.

India’s endeavour to monetise gold seems to be a noble motive, aimed at channelizing idle household gold holdings in to financial savings. It is widely estimated that the country houses around 24,000 tons of gold stocks, however, the actual number can be much higher than the estimates. Considering the fact that the country traditionally has a penchant for the yellow metal and most of purchases are unaccounted, it will not be absurd to claim household stockpiles two or three times more than the guesstimate.  The government’s plan is aimed to create a win-win situation for all the parties, wherein the common man can earn dividend on gold deposits, while the country’s dependence on imports is mitigated as the household stocks find its way in to the domestic supply. As a result, the unproductive asset for the households becomes remunerative; simultaneously, the perennial predicament of current account deficit becomes less challenging for the government.

The scheme also tries to incentivise the banks by allowing them to utilise gold deposits as part of their CRR/SLR requirements. However, there is no complete clarity on this aspect. This measure, if implemented, can help banks make productive use of their cash reserves, which otherwise remains unutilised with the RBI. Banks can earn profits by selling refined gold from the deposits to the jewellery industry and also improve the supply of the metal in the domestic markets. Easy availability will moderate the physical premiums and in the process improve the bottomline of the jewellery fraternity.

Although the scheme can provide a boost to certain sectors of the economy, there are structural impediments which question the much needed efficacy of the plan. We adumbrate the various constraints:

Low interest rates: For the scheme to be successful, it is imperative that the mass is incentivised to deposit its gold into the banks in return for lucrative returns. The government has not yet made any announcement on the interest rates; however, it is highly improbable that the banks offering gold deposits will be able to pay attractive returns considering that there are various costs involved in the process including assaying, melting, refining and storage. Moreover, the banks cannot afford to pay higher yields as this can lead to a sharp rise in gold imports, if participants try to cash in the difference between global gold lease rate and the deposit rate. The global gold lease rate is around 1.2%. Expectations call for the yield on the deposits to be between 1.5-2%, which is very nominal and fails to entice investors. As far as the jewellery industry is concerned, the specified interest rate is immaterial. Jewellery traders in the unorganised sector earn around 5-6% (depending on the credit profile) on lending gold bullion to the participants in the value chain. Unless, the interest rates are above 3% on the deposits, the scheme will fail to take off.

Reluctance to melt jewellery: The scheme entails gold in any form to be melted and transformed into refined product. Traditional families are emotional about their gold jewellery procured/fabricated during auspicious occasions like weddings, festivals. Roughly 90% of the household gold holdings are in the jewellery form and the rest is contributed by coins and bars which are mostly unaccounted. Monetizing gold implies losing the original form, which is a big dissuading factor for the individuals to subscribe to such a scheme. However, entities like temples and shrines can opt for monetisation considering that retaining the original form may not be a priority.

Ambiguity over unaccounted gold deposits:  Although the government has declared that there will not be any tax (income, capital gains or wealth) on the gold deposits, the depositors may be asked about the source of the gold holdings. As majority of the household holdings in the nation are inherited and unaccounted, it is extremely difficult to ascertain the provenance. The incumbent regime has already initiated a clampdown on black money and there is a high probability that the income tax authorities will grill the depositors on the source of their asset holdings. This can dissuade participation, as unaccounted deposits can invite trouble for lot of individuals as well as institutions.

No matter how lofty, the plans may be, the success of this scheme is entirely dependent on the participation of individuals. A similar plan may have worked in a country like Turkey but then the emotional attachment to the jewellery owned is different in India. Unless these concerns are addressed, it is difficult to envisage the plan attaining its noble objectives.