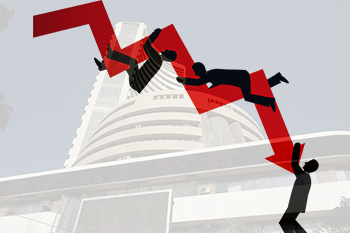 How real are Black Mondays in Indian stock markets?

Black Monday has become almost synonymous with market crashes and 19 April was no different.

Even before trading began on 19 April, there was a stalking fear that Black Monday would repeat. Black Monday has become almost synonymous with market crashes and 19 April was no different. The Sensex slipped 1300 points lower, before a bout of late short covering allowed the Sensex to close 883 points lower. What is worrying markets is that this is the fifth consecutive negative Monday for Indian markets. In the last 5 Black Mondays since 15-Mar, the one-day Sensex losses have been (-0.78%, -0.17%, -0.74%, -3.44% and -1.81%). But what exactly is this Black Monday?

Before we get into the Black Monday story in the Indian context, here is a dekko at how the idea of Black Monday came about. Black Monday refers to 19 October 1987, which was the day the Dow Jones Index crashed by -22.6% in a single day. Surprisingly, there was no real bad news in the market except some fears that Iraq could attack Kuwait to secure its oil supplies. That would eventually happen only 3 years later. But now for the real reason!

The 1980s, were the period when derivatives trading took off in a big way and institutional investors enhanced use of futures and options for hedging market risk. But, there was one more change that triggered Black Monday on 19 October and that was Program Trading or Algorithmic Trading. Today, we take algo trading for granted even in India, but back in 1987 algo trading was a new concept even in the US. How did algo trading trigger off the crash?

One of the big lessons that the SEC learnt on 19 October 1987 was that machines have the capacity to accentuate a market trend. For example, they can magnify optimism when markets are rising and also magnify fear when markets are falling. Program trades move billions of dollars in seconds and that kind of movement can create panic in markets. That is exactly what transpired on 19 October 1987. It started off as a small fall and then programs just magnified the fall and by the close of trading the Dow was down -22.6% and most world markets had lost -20%. That remains the biggest single-day fall in the Dow!

Actually, Black Monday is more of a convenient explanation for why markets tend to correct sharply when they come back after a break. Markets globally are shut on Saturday and Sunday and Monday represents the cumulative views of millions of traders after 2 days of rigorous weekend analysis. But, is this Black Monday trend really relevant in India. Let us check this with live Sensex data for the year 2021 and see if Black Monday is really a factor? In the above scatter chart, the blue dots represent the Sensex trend while the red dots represent the 1-day returns on the Sensex only on Mondays. For the sake of simplicity, we have ignored the other days. What do we see? Since the beginning of 2021, we have had a total of 15 trading Mondays. Out of these 15 Mondays, the 1-day returns on 7 Mondays was positive and the returns on 8 Mondays was negative. That is hardly representative of any trend, so it would be really tough to say that there is something like a Black Monday trend in the Indian context.

But there is something interesting we must not miss out. You will find that positive Mondays are concentrated in the first half of the graph when the Sensex was on an upward journey towards its Feb-15 peak of 52,154. However, ever since the market started correcting, we have just seen a concentration of Black Mondays in the second half.

What we can possibly conclude is that Mondays tend to accentuate the market trend. So, when trend is up (till 15-Feb), Monday were generally positive. However, when the market trend turned negative post 15-Feb, most Mondays were negative. In other words, the Monday effect tends to accentuate or underline the overall trend of the market, depending on whether the trend is up or down. Black Monday, is perhaps, more of a myth.

Why do Mondays underline the market trend?

There are 3 likely reasons why Mondays accentuate the market trend. Firstly, Mondays allow more global cues to be analysed and absorbed in a comprehensive manner before taking a view. Secondly, trades tend to chase direction on Monday as they see 5 continuous trading days wherein they can adjust positions based on the market conditions. Finally, the directional bias of algos also plays a part. This is a common reason for underlining market trend on Mondays.

The moral of the story is that we do not have to be obsessed about Black Monday, because Mondays work both ways. For now, if you are a long term investor, you can use these so-called Black Mondays to buy your favourite stocks at much lower prices.