x
Home » Top News » If there is economic slowdown, why are markets scaling new highs? 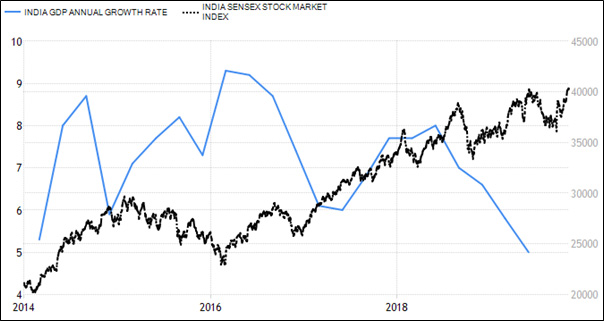 If there is economic slowdown, why are markets scaling new highs?

Be it the US, Japan or India, the economies are clearly slowing but the stock markets are hitting new highs. Let us first look at how it is happening.

In stock markets across the world, there is a rather anomalous story that is playing out. Be it the US, Japan or India, the economies are clearly slowing but the stock markets are hitting new highs. Let us first look at how it is happening.

Since 2016, GDP and Sensex have literally diverged

If you look at the chart above, the annual GDP trend is totally divergent from the Sensex trend. One can argue that GDP is growth and Sensex is an absolute number. Nevertheless, the trend does give a good picture over a longer time frame of 3-4 years. In early 2016, the Sensex was at around 23,000 while the GDP growth was sustaining above 7.5%; giving India the high-growth tag. Between early 2016 and mid 2019, the Sensex rallied from 23,000 to 40,000. During the same period, the average GDP growth has fallen from 7.5% to below 5.5%. In fact, analysts are expecting the GDP growth to dip even below 5% in the September quarter. What explains this dichotomy?

It’s not about the economy...

Back in 1992, Bill Clinton made the best of the economic mess created by George Bush (Sr.) and went to the people with his now famous slogan, “It’s the economy, stupid”. Bill Clinton went on to become President for 8 years and that was also the period of high economic growth and a rally in stock markets. This time it is not about the economy at all. Stock markets are focusing a lot more on factors like the stability of the government, spending on infrastructure, focus on consumption boost, next generation reforms, etc. The idea is that as long as the government is on the right reforms path, it is OK to bet on markets. The hope is that economic growth will eventually catch up.

Equities are pricey; but where is the choice?

At 40,000 plus on the Sensex the big concern for many investors is that the margin of safety is very limited. At a P/E of over 25X, that is a reasonable concern. But there are two other factors that are favouring equities. Firstly, the alternatives to equities have more or less vanished. Demonetization put brakes on real estate as an asset class and a slew of interest rate cuts have made debt less than attractive. Gold may still be shining but not too many Indians are willing to buy gold at Rs40,000 per 10 grams. Secondly, there is the problem of negative rates globally. Bonds worth $15 trillion carry negative yields. Fund managers and pension account managers are now buying equities (including EM equity) to make up for the return shortfall. This is driving a lot of long-term money into Indian equities.

It would be easy to be cynical and say that for Indian markets hope is a good breakfast, good lunch and good supper. The reality is that Indian equities are finally in a sweet spot. Here is why!