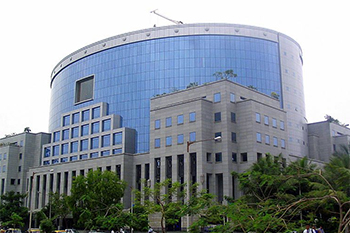 Since last week, IL&FS has been all over the news and not for a good reason. The group's position is being widely discussed owing to the sharp rating downgrade of its subsidiaries’ commercial papers (CPs) and non-convertible debentures (NCDs), which with respect to mutual funds, corresponds to non-investment grade.

In fact, since mid-August, debt instruments of four subsidiaries of IL&FS have been downgraded to non-investment grade. The parent IL&FS was downgraded by ICRA and CARE Ratings this week, owing to elevated debt levels, slow asset monetization, and deterioration in the credit profile of its subsidiaries.

Although this was the first time IL&FS’s rating was downgraded, this should not come as a surprise, as the case of unsustainable debt levels has been building up over the years.

What triggered the most recent downgrade?
IL&FS’ books came under RBI’s scanner as the central bank initiated a special audit after one of its subsidiaries defaulted on repaying ~Rs250cr worth of inter-corporate deposits of Small Industries Development Bank of India (SIDBI).

So, what went wrong?
As per the company’s annual report, IL&FS has 6 infrastructure group companies, 4 financial group companies, and one technology arm. Of these, seven companies have raised debt via NCDs and commercial papers and four have been downgraded as under:

Source: Company Annual Report, ICRA and CARE rating rationales
IFIN’s debt rating was downgraded in light of weakened liquidity conditions and the company’s high debt service obligations. The company mainly lends to infra and real estate projects which have long gestation periods and are capital intensive. The company had maintained a capital adequacy ratio of ~20% over the past few years; however, this declined to 17.25% as of March 31, 2018 owing to the increase in loan-book.

In addition, in compliance with RBI’s Commercial Paper Directions 2017, the company will be barred from raising funds via commercial papers until February 28, 2019, which further strains the liquidity of the company.
As per ITNL’s website, the company has 33 build-operate-transfer (BOT) projects and five projects under the engineering, procurement and construction (EPC) model. These projects have largely been funded by debt resulting in high leverage. Further, the company has not been able to monetize some of the completed projects, leading to tight liquidity conditions. In fact, the interest coverage ratio (ICR) of the firm has been merely 0.5-0.6 in the last three years. Its gearing ratio for FY18 is 3.04 vs. 2.6 in the previous year.

In addition, four of ITNL’s project special-purpose vehicles (SPVs) reported irregularities in debt servicing in June-July, as per an ICRA note.

The company in its annual report mentioned that three of ITNL’s projects—Fagne-Songadh and Amravati-Chikli road projects and the Srinagar Sonamarg Tunnel Project—are awaiting financial closure even after a period of more than three years. Hence, the funding is being partly provided by ITNL with IL&FS Group support and via bill discounting facilities, leading to a further strain on cash flows.

Lack of equity funding has also affected drawdown of loans sanctioned in 2 projects. Moreover, due to the large debt level of ITNL, most banks have already exhausted their exposure limits, and hence, are reluctant to fund its projects, resulting in a vicious circle.
Due to legacy issues, IECCL faces a huge debt burden on its balance sheet. Further, the net worth of IECCL has eroded due to continuous operational losses, and hence, continues to remain negative. Despite the promoter IL&FS group having infused funds in IECCL to provide liquidity support, the operating performance of IECCL has remained subdued.

The company’s working capital borrowings have almost doubled from Rs354.27cr as on March 31, 2015 to Rs769.52cr as on March 31, 2018. The company’s debt/equity ratio has also risen from 15.88 in FY17 to 17.33 in FY18, indicating mammoth debt levels.
Historically, the company has been meeting its debt repayments by monetizing its assets, refinancing with new loans, or using support from promoters.

The delay in the receipt of funds from these alternatives had led to weak liquidity and thus increased the refinancing risk given the sizable near-term repayment obligation (Rs744cr) along with high counter-party risks for the operational power projects under the various Special Purpose Vehicles (SPVs), given the weak financial health of the state power distribution utilities.

Who are IL&FS’ shareholders and why does this matter?
As of March 2018, the major shareholders of IL&FS Investment Services were as follows: 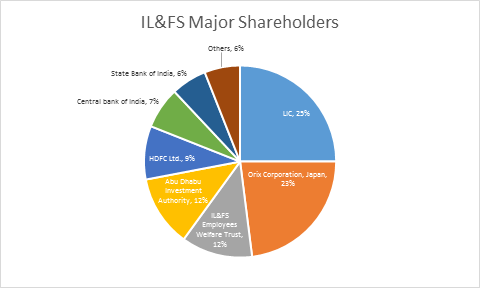 As can be seen, LIC is the largest shareholder of IL&FS. In July 2018, when Ravi Parthasarathy, who managed the company for nearly 30 years stepped down to be quickly replaced by LIC’s Hemant Bhargava as Chairman, there were talks regarding LIC’s bailing out of IL&FS, in-line with the former’s reputation of bailing out debt-laden PSUs.

As IL&FS seeks an aggregate sum of Rs8,000cr as equity support from its shareholders, LIC will have to pitch in a huge sum, in-line with its shareholding. Would that amount to essentially bailing out a private firm with some public shareholding?

The story of IL&FS’ mounting debt pressure is not new. In 2015, Ajay Piramal, Chairman of Piramal Enterprises, had shown interest in acquiring control of IL&FS but ultimately backed out, owing to the company's humungous debt levels, it was rumored.

What’s the way out?
The way out appears to be only one: capital infusion by the parent company

IL&FS needs regular funds to enhance the overall liquidity of the group. For this purpose, it is in the process of raising Rs8,000cr from the promoters through a combination of rights issue and long term line of credit.

While ITNL seeks to raise Rs4,500cr through this rights issue, the parent IL&FS would need to contribute about Rs3,300cr to this if it intends to maintain its shareholding of 73%. To be able to put this money into ITNL, IL&FS is planning its own rights issue of Rs3,000 cr.

According to ICRA, IL&FS’ largest shareholders will most likely provide the required assistance, given their demonstrated history of equity support—rights issuance to LIC, ORIX, and ADIA in FY15 and preference share issuance in FY16.

Impact on mutual funds
IL&FS has Rs2,500cr worth of rated commercial paper, of which Rs2,020cr was outstanding as of July end, subscribed mainly by mutual funds and companies, according to CARE Ratings. Around 12 asset management companies have exposure to various papers issued by the IL&FS group.

When a bond falls to a non-investment grade, as per SEBI, mutual funds have to value the same at a discount of 25% of the face value. Thus, funds that hold IL&FS debt instruments will be affected.

Has IL&FS been taking any steps all along?
According to ICRA, IL&FS group has been trying to monetize a number of businesses and projects, however, progress has been slow, resulting in increased leverage.

As per the rating agency, this is how it all went downhill: “Just like other infrastructure companies, IL&FS too expanded its portfolio rapidly during the infrastructure boom years and is now facing trouble with some of its projects, particularly in the roads sector.”

“The overall financial risk profile of the parent company IL&FS has seen weakening on account of group’s elevated leverage levels and moderation in credit profile of key business verticals like energy and engineering verticals,” it adds.

The standalone long-term debt/equity ratio of the group has increased to 3.08 times as of Mar’18, compared to 2.6 times in Mar’17.
The rising debt levels, the evident difficulty in servicing its debt obligations, refinancing issues, and project slowdowns have all trapped IL&FS in a vicious circle, it appears.

As of now, the ratings for its subsidiaries’ debt continue to remain on “credit watch with negative implications” given the group’s strategy to de-leverage the balance sheet via equity support, debt reduction through refinancing, and monetization of specific identified assets by the end of FY’19. Whether the plan will break the cycle and heal IL&FS’ bleeding arms, only time will tell.