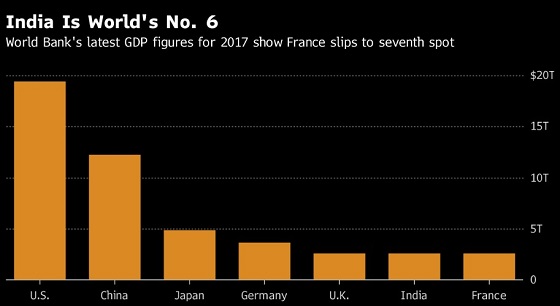 India overtakes France in terms of GDP: Is it reason enough to cheer?

A day after France stormed into the FIFA World Cup final beating fancied Belgium along the way; India overtook France to become the sixth-largest economy in the world.

No, we are not talking about extremely dubious measures like the Purchasing Power Parity (PPP), but pure and hard GDP data. With an annual GDP of $2.597tn, India has just edged past France at $2.582tn.

In terms of real GDP, India is now the sixth-largest economy in the world with only the US, China, Japan, Germany, and the UK having an annual GDP more than us. Interestingly, India had been ranked 10th in the GDP pecking order just four years ago when the current government came to power.

Over the last 4 years, India has overtaken Russia, Canada, Brazil, and now France to reach this spot.

But, was that not all about the commodity slump?

To be fair, that is partially true! Russia, Canada and Brazil, the three economies we beat along the way, have taken a big hit on the commodity front over these years. While all three economies took a hit on the back of weak oil prices, the sharp fall in industrial commodities also took its toll.

However, overtaking France was genuine and so will be the case with UK, which is expected to happen shortly. India may have grown at sub-7% in fiscal 2018 but even the IMF has projected Indian GDP to grow at 7.4% and 7.9% in the next 2 years. This will be almost twice the growth of the world economy, which IMF has projected to grow at 3.9%.

So, commodity slump or not, the bigger story is that Indian GDP has actually doubled since the Lehman crisis of 2008. No other large economy has achieved this, and that is a unique distinction you cannot take away from India. This Bloomberg chart is quite explicit!

But, are we comparing apples and oranges?

The answer would be “Yes and No”.

While India has a GDP per capita of less than $2,000, France enjoys GDP per capita of over $42,000. That said; India also lags France on other parameters like literacy, primary health, primary education, etc. While the GDP is a hard fact, the comparison has to be put in perspective.

Nonetheless, India has still managed a miracle in the last 10 years! Doubling GDP in 10 years after a crisis of the magnitude of Lehman is not easy and no other large economy has managed anything remotely close to that.

India is just about beginning to invest in infrastructure in a big way and the outcome of that should be visible in the next 10 years. The government has a target of doubling farm incomes by 2022 and that should spur the GDP per capita in a big way.
Let us not forget that India is the world’s largest recipient of Foreign Direct Investment (FDI) and with a forex reserve chest of $410bn, it is surely a force to reckon with.

Parting thoughts of a French visitor

Five years ago, I had received a French client from the airport and driven him around for three meetings at Nariman Point, Lower Parel, and BKC, before dropping him back at the airport in the evening.

We had spent more than six hours driving around and he casually asked me how many kilometers we would have traveled. There was a look of astonishment on his face when I told him that we would have covered around 50km. His response was epic: “In that time, I would have driven from Paris to Brussels and back.”

The huge gap in the infrastructure levels of the two countries possibly makes this comparison a lot starker. But that is an item on the agenda when India tries to overtake Germany and Japan in the next round.