x
Home » Top News » Kerala floods: What is the economic cost of the disaster? 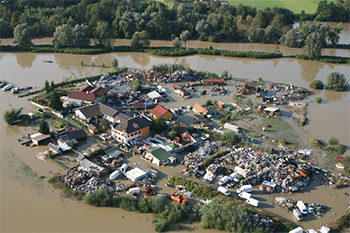 Kerala floods: What is the economic cost of the disaster?

When all costs are added up, the big question is whether some costs can really be quantified.

To say the least, God’s Own Country has been largely devastated. With the let up in rains only temporary, the crisis in Kerala appears to be far from over. While the press has already reported over 350 dead and property worth Rs10,000cr damaged, this may just be the tip of the iceberg. The real story will only be clear once the inaccessible areas are accessed and the real impact of the damage is seen. However, that is a different story altogether.

In the midst of the outpourings of sympathy and help as well as serious issues regarding environmental degradation being raised, there is a huge economic cost that is gradually becoming visible. In the last few years, we have seen a series of floods that have wreaked large-scale devastation due to rains in Tamil Nadu, Jammu & Kashmir, Uttarakhand, Uttar Pradesh, Bihar, and now Kerala.

Let us zoom in on the economic costs of such natural disasters taking into account Kerala’s current situation.

Sizing up the economic implications of Kerala floods

To begin with, Kerala is nowhere close to being as industrialized as states such as Tamil Nadu or Maharashtra. Also, it is not critical for food crop cultivation as is the case with Punjab, Haryana, Uttar Pradesh, and Bihar. Despite all these factors, one cannot dismiss the importance of Kerala from an economic standpoint.

According to an estimate, 20% of the companies in the BSE500 have a direct or indirect exposure to Kerala and the impact of the floods is likely to show up in their second-quarter results. Kerala is significant economically for four key reasons:

• The big and immediate impact could be on the prices of rubber. Kerala has a virtual monopoly in rubber production (~90% production share) in India. Rubber alone accounts for over 40% of the cost of production of an automotive tyre. The floods will mean supply disruptions as well as a price rise due to a sudden supply squeeze. As a logical corollary, the auto industry could also be impacted by these floods. This impact could be seen in the next couple of quarters.

• Some specific segments of the financial services business such as the gold loan business and the NRI remittance business may be impacted in the short to medium term. In fact, both Muthoot and Mannapuram derive nearly 15% of their total gold loans business from the state of Kerala alone. Consequently, such massive devastation could also mean NPAs for banks and rising insurance claims for insurance companies. There are specific banks like Federal Bank, Catholic & Syrian Bank, and South Indian Bank, which have a very strong Kerala franchise.

• Kerala has seen a massive construction boom in the last few years, and the major demand for cement and concrete in the South comes from the state. Companies like India Cements and Ramco have a very strong Kerala franchise, and they could see negative vibes in the next few quarters. This construction activity is likely to slow down for two reasons. First, the state will have to get over its devastation. Second, environmentalists are already blaming rampant construction activity for these floods as it is supposed to have disrupted the delicate ecological balance in the Western Ghats. This could be a challenge in the coming quarters.

• For the FMCG sector, there could be multiple implications. FMCG companies have been talking about rural demand and companies like HUVR are already deriving 50% of their revenues from rural areas. Higher levels of literacy and a rising middle class have been a major boost for Kerala and that has made the state a key market for most FMCG companies. In fact, if you look at specific products like Parachute Hair Oil from Marico, you would know that companies manufacturing such products depend on Kerala for ~30% of their copra procurement. Kerala is also the biggest market for coconut hair oil. Such disruptions will be visible in the coming quarters.

• The tourism sector has also taken a hit with train and air services being crippled, and most places being inaccessible due to rising flood waters. The sector will only revive after a considerable time, as the state copes with the tragedy on all fronts.

Insurers to take a big hit

The initial estimate of insurance claims as a result of the floods is at ~Rs500cr. It is not going to be as disastrous for insurance companies as the ~Rs5,000cr claims they had to pay out in 2015 in Chennai or Rs2,000cr that they paid out in Jammu & Kashmir. The IRDA has already instructed the insurance companies to settle all claims expeditiously considering the magnitude of the tragedy. That will put pressure on immediate cash flows of insurers. Health insurance companies could also take a hit due to waterborne diseases. The real damages to the coffee, tea, cardamom, and rubber plantations are yet not known.

Opportunity losses could be huge

There have also been huge opportunity losses in terms of families displaced, roads destroyed, power supply disrupted, trains canceled, etc. ~5% of the population of Kerala is displaced in some form with many in relief camps. Train services over large parts of Kerala continue to remain suspended till date. Nearly 10,000km of national state highways and over 60,000km of Panchayat roads have been either damaged or not in use. Power production is down by ~33% in the last 45 days, and electricity supply has been switched off in most places to avoid mishaps.

When all these costs are added up, the big question is whether some costs can really be quantified. For now, the economic costs are absolutely real.