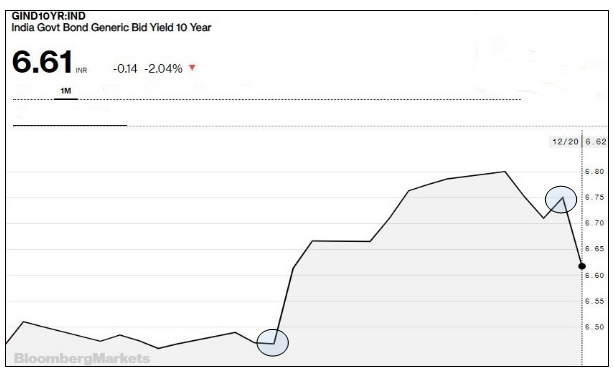 While reviving growth had been the central theme of the last few MPC meetings, the 20th MPC focused largely on inflation concerns.

The minutes of the Monetary Policy Committee (MPC) released on December 19, 2019 clearly pointed to rising concerns among the six members about inflation. While reviving growth had been the central theme of the last few MPC meetings, the 20th MPC focused largely on inflation concerns. Based on rising inflation concerns, the MPC had chosen to maintain status quo on repo rates at 5.15%. However, the stance of the policy was retained as “Accommodative” to give a positive trajectory to growth.

In the last one month, there were two diverse trends on benchmark bond yields. Post the policy, the bond yields shot up sharply due to disappointment over status quo on rates. However, yields have tapered after the minutes of the MPC clearly underlined that the committee members saw the inflation as temporary. Here is what the MPC deliberated on before arriving at their view.

Chetan Ghate voted for status quo on rates and continuation of accommodative policy. His concern was more on inflation expectations with 3-month forward inflation up by 120 bps and 1-year forward inflation up by 180 bps. According to Ghate, such a spike was unheard of in the last 3 years and called for caution on further rate cuts. However, Ghate also pointed out that the average bank lending rate had fallen by 15 bps and that called for monetary policy stance to be maintained at accommodative.

Dr. Dua focused on the larger than life role played by food inflation over the last few months. According to Dua, higher expected household inflation was largely indicative of the pressure on food prices continuing for some more time. There was little visibility of food inflation moderating before March 2020 and that called for caution on the rates front. Dua considered it necessary to hold rates and wait for the monetary transmission of previous rate cuts to fully play out. Considering the elevated risks of food inflation post the unseasonal October rains, Dua also preferred status quo on the rates front.

Dr. Dholakia pointed to the consistent GDP downgrades by the RBI and did not see the urgency to cut rates. According to Dholakia, the growth impulses were missing in the light of weak capacity utilization and lack of consumption demand. Tepid private investments were only delaying the process. Dholakia was of the view that monetary measures may have played their part in the growth story and it was over to fiscal measures. Dholakia also voted for status quo on repo rates and continuation of the accommodative stance.

Dr. Patra felt that high inflation may only last for 2-3 months till the base effect wore out. However, he also pointed out that due to the conflicting pulls of weak growth and high inflation, it was better to play cautious. Patra also pointed that real interest rates in India had already fallen from 4% last year to negative returns this year. Hence, rate cuts must be more calibrated than mechanical. He emphasized the need to keep rate legroom available when growth turns around. The verdict was status quo on rates and accommodative stance.

B P Kanungo, focused on the missing transmission effect. The weighted average lending rate (WALR) reduction had improved from 29 bps to 44 bps. However, this was substantially lower compared to the 135 bps rate cut since Jan-19. According to Kanungo, the committee would be well advised to hold rates till the weighted average term deposit rates also saw proportionate reduction. That was the key to monetary transmission. Kanungo voted for status quo on rates and extension of an accommodative policy stance.

While expressing concerns over inflation, Das focused more on the need to wait for the full impact of the counter cyclical growth measures taken by the current government. These include corporate tax cuts and the infrastructure spending package. Das also emphasized that while incremental monetary transmission was already happening fully, it was the historical transmission over the last one year that was disappointing. Das also favoured status quo on rates and an accommodative stance. However, since the status quo decision on rates was unanimous, no deciding vote was required.

The cautious stance of MPC members in December is understandable. Inflation is rising, transmission is constrained and growth impulses looked some time away. Between December and the next monetary policy, there would be the all-important 2020 Union Budget. That could provide a lot of fiscal cues for the MPC!