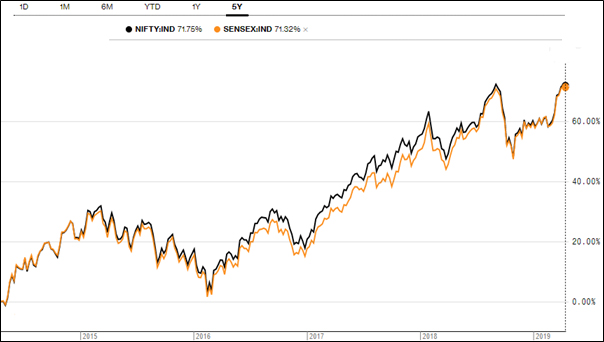 The Nifty and the Sensex have given total returns of over 71% in the last five years, which translates into 11.4% annualized. That is in tune with the historical average of the Nifty over the last 24 years. But what really matters is that these returns came at a point when the market cap of the Indian stock market was already well over $1 trillion. That is what makes this round of wealth creation special. What is the message now; is it time to celebrate or the time to be sceptical about the market? Here are 6 points to consider.

Why are the markets at a new high ahead of elections?
There are diverse set of reasons for the market touching new highs. However, some of the positives at this point of time are really compelling. Let us look at them.

Nifty new high appears to be more of a calibrated outcome than a knee-jerk reaction. It is time to celebrate the high!