x
Home » Top News » Pangs of Deflation: The nemesis of the Central Banks 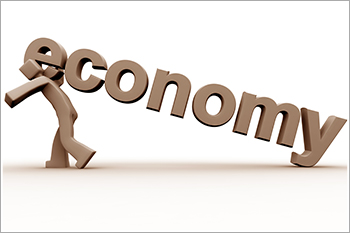 Pangs of Deflation: The nemesis of the Central Banks

An improvement in global economy, tapering in the US bond buying programme and rising sovereign bond yields seemed to be the unanimous call by various economists at the onset of 2014. People also anticipated inflation rates to spike higher. However, things have panned out quite dramatically. Although Fed’s quantitative easing programme came to an end, sovereign bond yields have contrastingly moved lower. Forget inflation, the threat of deflation is looming large across various economies. The predicament of the contemporary central banks can be illustrated by the fact that regardless of loose monetary policies adopted by various central banks during the past six years, the outcome has been a fall in commodity prices and slowing growth across the globe. This is antithesis to the theory that injection of money supply leads to inflation and stimulates growth. Such is the sorry state of affairs that ECB and BOJ have miserably failed to attain even benign inflation levels. In fact, US Federal Reserve has not yet garnered courage to hike interest rates in spite of improvement in economic landscape. Majority of the Federal Reserve officials are still concerned that a premature rate hike can jeopardize the growth prospects, considering the fragile health of the global economy. The prevalent interest rate environment is unprecedented, wherein several economies including US, Europe and Japan have persisted with ultra cheap rates since the financial crisis of 2008.

Recent decline in oil prices have also aggravated the deflationary situation. European economy is particularly bearing the brunt of lower oil prices. The region is witnessing contraction in growth for the past two years. Making matter worse, emergence of deflation has poured water on European Central Bank’s endeavour to revive the economic trajectory. Hefty taxes, inflexible labor policies, austerity measures and generous social programs have impaired the ability of the region’s economy to recover. Eurozone GDP expanded by meagre 0.2% and 0.3% during the third and fourth quarter of 2014. The economy is in the state of dire straits, as cheap and easy money is yet to trigger higher business investments and consumer spending. Considering the double whammy of economic contraction and deflation, the central bank will be forced to adopt a lax monetary policy stance for a long time to come.

Various countries (categorically Japan) have devalued their currencies to revive the economy, however, the efforts till now has proved futile. Japan’s Abenomics have failed to attain the desired results. Abenomics is proclaimed to be motley of economic measures/policies, which is meant to resurrect Japan's economy from the deterioration witnessed during the past two decades. Shinzo Abe laid down aggressive economic recovery plan, with the central bank expanding monetary supply in order to combat deflation. Massive bond buying by the central bank was accompanied with increase in government spending. The recovery plan also entailed annual inflation target of 2% (Excluding the effects of the sales tax hike), devaluation of yen, maintaining negative interest rates and encourage public/private investment. Contrastingly, Japanese GDP contracted during the second and third quarter, while the last quarter has managed modest growth of 0.6%.  Sluggishness prevails inspite of aggressive measures initiated by Prime Minister Abe to rejuvenate the economy. Ensuing weaker yen has failed to turn the fortunes of struggling export sector. Japanese exports remain vulnerable to the broad-based slowdown across the globe (categorically China, Brazil and Indonesia). Japanese exports are heavily dependent on the trade in emerging economies, where growth has clearly slowed down during this year. A hike in the sales tax from 5% to 8% early this year also dampened the consumer spending. Now the government is contemplating at more easing and have retreated from the plan to further hike the sales tax. There is an urgent need to spur consumer spending amid fragile export markets. Japan’s central bank has already stacked up huge chunk of federal debt in the process of reviving the economy. Japan’s government debt as a percentage of GDP has ballooned from 167% in 2008 to literally 227% in 2014. A phenomenal rise in the government debt load raises doubts about the sustainability of such largesse. Unless the export demand spearheads the recovery process, there will be a lot of questions left unanswered.

In China, interest-rate cuts and monetary stimulus has failed to rejuvenate the sagging economic trajectory. In this respect, GDP growth for 2014 was reported at 7.4%, the lowest rate of expansion in more than 20 years and well off the 2013 rate of 7.7%. Latest figures reveal that GDP for Q4 2014 grew at 7.3%. In addition, the country’s official PMI showed factory activity shrinking for the first time in nearly 2-1/2 years. On inflation side, Chinese consumer prices during January are reported at a five-year low, rising by meager 0.8% on yoy basis. Producer prices have been contracting for the consecutive three years, with the recent reading denoting a decline of 4.3% on yoy basis. Considering this gloomy scenario, there is a wide expectation that the Chinese regime will initiate steps to arrest the ongoing slowdown. There is more room for the Chinese interest rates to fall, considering the fact rates are well above the levels prevalent in the Western world. However, Chinese will be dissuaded from following the Western monetary policy, as abysmally low interest rates have failed to deliver any kind of steady growth. China, already being a highly debt leveraged economy, faces a serious dilemma of whether to clampdown on credit growth (including shadow banking) or foster lending in order to revive growth.

Debt-driven economic growth has been the norm in China for the past several years; nevertheless the school of thought that such expansion is not sustainable is gaining credence. Escalating quantum of the country’s bank credit remains a worry. China’s bank credit to GDP ratio has reached a situation, which is akin to the bubble peak in Japan during 1980s and 1990s. Chinese banking system is troubled with high ratio of non-performing loans. Rapid credit expansion which fuelled exceptional economic growth during the yesteryears is now deemed as a culprit for the bubbles in the economy. Expanding credit supply can be colloquially termed as an ‘amphetamine’, which has cranked up phenomenal asset appreciation during the past few years. However, over-dosage of the stimulant can lead to chronic depression. China has a weak banking framework, which weighs on the overall health of the economic system. China suffers from highs levels of non-performing loans but the same is not reflected in the figures released by the government authorities. The prevalent financial environment incentivizes excess lending while credit appraisal is paid less heed.

In India as well, sharp decline in oil prices has led to moderation in inflationary pressure. Retail inflation has eased to 5.11% on yoy basis during January, when compared with the peak of 12% during 2013. Meanwhile, wholesale prices declined by 0.39% on yoy basis, a complete contrast with the growth of 9-9.5% in prices during 2011. This has persuaded the central bank to cut repo rate by 25 basis points. Although inflationary pressure remains benign, Reserve Bank is irresolute regarding the interest rate trajectory. The incumbent government has been strongly lobbying for further cut in interest rates. However, economic crosscurrents across the globe have fostered indecisiveness.

Although loose monetary policy may have delivered some goods with US unemployment rate mitigating from 9% during September 2011 to 5.7% in January 2015, the growth in real wages has been uninspiring. Interestingly, most of the job creation has been contributed by the low paying sectors such as retail trade, leisure, hospitality and part-time/temporary work. Temporary/part time work has accounted a chunk of the jobs growth. Weekly work hours less than 35 hours is categorised as Temporary employment/Contingent work. People generally tend to do part-time work as they are not able to find full time employment. Temporary workers are prone to retrenchment and have much less purchasing power than the full time employees. Lucrative sectors like manufacturing and construction have disappointed as far as creating jobs is concerned. Notwithstanding the robust automobile sales and bottoming out in housing markets, manufacturing and construction sector has not been able to garner the quantum of jobs. Retail trade has catered immensely to the part-time workers, while manufacturing sector provides full time employment opportunities. This is evident from the fact that the average weekly work hours in manufacturing stands around 41 hours, while in the retail trade it accounts just below 32 hours. Weekly work hours below 35 qualifies for part-time employment. Quality of jobs has been a concern as it directly impacts the recovery in the broader economy. In fact, low-paying jobs expansion has led to subdued growth in overall wages, which hinders the growth in personal income levels and consumer spending.

We seem to be dwelling in an environment, wherein growth in money supply overlaps the growth in demand for goods and services. The eventual outcome is disinflation, which can simply aggravate into deflation. Recent flow of economic indicators across the globe corroborates the same. Commodity markets, particularly during the past few years, have clearly manifested signs of deflation. Excessive lending in the world economy has created excess production capacity. For example, energy markets have borne the brunt of shale revolution in United States, with oil prices collapsing to six-year lows. Economic slowdown and credit bubble in Chinese have also adversely impacted demand for various industrial commodities. Effectively, prices of commodities like Copper, Aluminium, Zinc and Iron ore have hit multi-year lows. Cheap credit over the years stimulated large investments in the production capacity and as a result created excess on the supply side. Supply glut and weak demand across the globe is symptomatic of long term deflationary trends. Strategic acumen teaches to keep the powder dry before the problem arises. However, such is the plight of the central banks that they seem to have already exhausted their arsenal to avert deflation. Persistent quantitative easing and ultra cheap interest rates have failed to nip the mess in the bud. Inefficacy of   the alternative monetary policy has also compelled nations to debase the currency and in the process permeate deflation on the global stage.

Most importantly, stock markets have been addicted to the instant gratification provided by the monetary injection. Once the effect of the stimulus wanes, the financial fraternity (bonds, stocks, equities) starts dwelling on the perception of an extension of the quantitative easing. Such a scenario is reminiscent of the cliché ‘Charity degrades dignity and never begets real prosperity.’ The root problem remains unresolved. The billion dollar question is whether such a practice is sustainable, with no notable improvement in the real economy? The experiment of Quantitative easing seems to be failing as central banks will soon run out of the ammunition to tackle the burgeoning mess. There is hardly any breathing space, with literally zero interest rates in most of the developed nations. Emergence of Deflation is making the job of the financial policy makers’ gruesome. Buoyant equity markets may portray a Utopian world. Nevertheless, the real economy has a different story to tell. The real challenge for the central bankers will be not to fall victim to the prevalent illusion.

LNG prices rise in Asia, on fear of shortage in the coming winter