Performance of stock market a decade back and now

As Indian markets complete another decade, it is time to look back at the performance of the stock markets in the last 10 years.

As the previous decade ended in 2009, the global markets were in a state of flux. The global economy was just emerging from the financial crisis which had pushed most of the investment banks to the brink. Growth in the global economy is yet to get back to pre-crisis levels. However, an amalgam of liquidity infusion and fiscal policy ensured that the world economy has put the memories of the financial crisis behind.

As Indian markets complete another decade, it is time to look back at the performance of the stock markets in the last 10 years. What are the stories that buoyed the markets and what are the sectoral themes that depressed markets. Above all, did the large caps outperform the mid caps or was it the other way round?

How the benchmark indices performed over last 10 years?

We take the BSE Sensex as a proxy for the large cap universe. Since the mid cap index is not too representative of the heterogeneous mid cap universe, we substitute that with two broader indices viz. the BSE 500 and the BSE ALLCAP. Here is how the last 10 years look like. 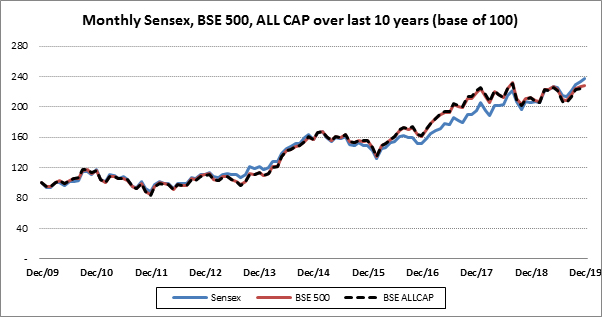 How 3 unique themes performed over the last 10 years?

Why do we consider these as 3 unique themes of the last 10 years? Let us look at each of these themes separately. Firstly, realty was the theme that literally drove the euphoria in the last phase of the rally between 2006 and 2008. Oil & gas had a tough time in the first half of the decade but benefited in the second half. Global crude prices fell vertically even as India moved towards free pricing. Lastly, healthcare was a super performer in the first half of the decade but has been a laggard after that.

Realty sector needs no reiteration and it has still not been able to come out of the crisis of 2008. The situation appeared to improve towards the middle of the decade. However, demonetization, GST and the introduction of RERA put brakes on the realty sector. It remains the big underperformer of the decade. Oil should have done much better but the gains in the second half of the decade were curtailed by the government extracting too much out of oil in the form of duties. Also, ambiguity on privatization has not helped matters. Healthcare was the big star between 2010 and 2015. However, since then the sector has suffered from wholesaler consolidation in the US, intense competition, pricing pressure and a rather punitive approach taken by the USFDA.

How 4 big gainers buoyed the markets in the last 10 years?

Autos, banks, FMCG and IT were the major sectors that drove the rally in the markets over the last 10 years. Of course, FMCG and banks have been extremely consistent. IT was a lot more erratic in the middle years before picking up. Auto should have been a star performer but a lot of value damage was seen in the last 2 years and that led to sobering of performance. These four sectors account for over 70% of the Sensex weightage and their buoyancy has largely explained the positive sentiments in the Sensex.

Of the 4 major drivers of the 10 year rally in the Sensex, the secular story has been about FMCG and banking. Clearly, the consumption story is still what has driven the markets. Auto was the only major sector that has turned towards negative territory in the last couple of years. IT had its share of margin compression but has creditably stabilized.

Finally, the 3 stories that let the stock markets down

The three stories above were the cyclical representations of a larger problem with the domestic and world economy coupled with insufficiency of industrial demand. That has been the theme of the last 10 years, both in India and abroad. The BSE Capital Goods index has been virtually flat and the returns have not even covered the rate of inflation. The revival in the capital investment cycle continues to be elusive.

Another big disappointment in the last 10 years was the PSU space. Banks were loaded with $200 billion worth of bad loans and most of the PSUs were struggling to compete with the private sector. The third big disappointment, and largely global, was the metals space. The metal up cycle tapered post 2008 and has not recovered since. In the last 4 years, China has seen its GDP growth slipping precariously and that has not been helping matters. With cheap metals from China flooding the Indian markets, it has been a bad 10 years for metals. Of course, the US-China trade deal remains the singular hope.

In short, the last decade has continued to be the story of consumption. However, revival in industrial growth has remained elusive.