Read Full Story
When the RBI hiked the repo rates by 25bps to 6.25% on June 6, 2018, the markets heaved a sigh of relief that the outlook was not changed to hawkish. The Monetary Policy Committee (MPC) still maintained its monetary stance as neutral. While this is not really an indication of the direction of rates, it means that the RBI could move rates either ways, depending on the macro data.

A rate hike cycle is a sustained hike in repo rates by at least 200bps. If you look back at the last 18 years, there have been three distinct up cycles in Indian rates:
This is nothing like 2011, but there are more rate hikes in the offing

At the outset, the rate hikes from here on may not even remotely resemble what happened in 2011. A 400bps rate hike almost looks unlikely at this point of time. However, the fact that the RBI has decided to front-end the rate hike in June before the Kharif data indicates that there is concern about the inflation and the rupee. In addition, the global price of crude oil is also a worry. What we can conclude is that while there could be more rate hikes to the tune of another 25-50bps, it is unlikely to go beyond that. There are four reasons for this perspective.
For now, the view appears that dovishness is not an option any longer. While the RBI may be more calibrated in its approach, hiking rates by another 25-50bps would help the RBI hit many birds with one stone. It will address the challenges of inflation, rupee weakness, trade deficit and foreign portfolio flows. 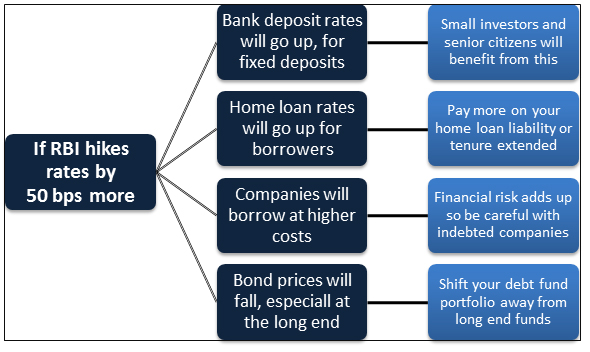 What will another 25-50bps rate hike mean for investors?

A rate hike will mean a rise in the rates on deposits and on borrowings, as we have already been seeing for some time now. Here are three implications for investors and borrowers.
To sum up, it looks like another couple of rate hikes in the offing. It may be too early to conclusively say if the rate hike cycle has turned upwards.