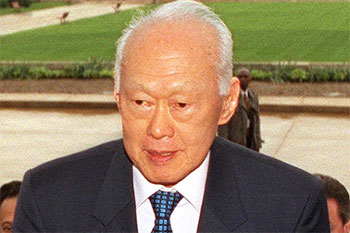 Given the fact that men like him are rare – ever brimming with self-belief, ever obsessed with results and ever impervious to condemnation - both his admirers and detractors will feel his loss, what if not in equal measure. IIFL pays tribute to Lee Kuan Yew, the architect of Singapore’s phenomenal transformation into Asia’s premier financial superpower.

Known as Harry Lee to the Western world, Lee Kuan Yew had a middle class upbringing and a Cambridge law degree. Both attributes fell short of defining his stately persona which knew no bounds, ever bursting at the seams that it was in his island nation of limited natural resources. It was the sheer flexibility of his pragmatism, not merely its fervor, that made him unique. Throughout his regime, he harbored no particular ideology, but he was always full of ideas, which he claimed were always in line with the given circumstance.

In an epoch-making rule spanning three decades, his leadership, taking a cue from Israel, took his country to phenomenal heights; a leadership what many thought was more authoritarian than authoritative. But he cared little about his detractors as he single-mindedly fought the demons in the way of the country’s progress – prime among them being scarce natural resources and an entwined ethnic and cultural diversity of near-zero commonality. His vision of prosperity for Singapore was labeled hedonistic by his critics and his ruling style nepotistic but he remained unruffled. Late in life, he did admit to things he shouldn’t have done but the tone was distinctly philosophical, never apologetic.

He established English not merely as the business language but as the unifying idiom to bind the disparate Malay, Chinese and Tamil populace of his country. And more than making Singapore a start-up haven known for its ease of doing business, he also made it a vibrant tourist attraction, replete with arts galleries, museums, music halls and even casinos. Above all, he urged his people to do the simple things – taken for granted but easily forgotten – like improving their disposition, smiling more often and bettering their civic sense – flushing toilets without fail, abstaining from spitting and chewing gum and dumping garbage only in the bins erected for the purpose. In return, he made citizen safety his top priority.

The results were phenomenal and for all to see. Once known only for its mosquitoes, slum pockets and poverty, Singapore became the first choice for global investors, more so for budding entrepreneurs with innovative value propositions. Singapore made the most of its strategic port, boosted exports of electronic and chemical products and improved the country’s financial system among other things. No wonder, Singapore is a preferred wealth management hub for global investors.

Today when Lee Kuan Yew is no more, it’s even more futile to dissect the pros and cons of his headship in what would prove to be an arid academic exercise. Instead, we should focus on the enduring aspects of his visionary strides which are critical to India’s future including that of its much-publicized ‘Make in India’ campaign.

Take the case of corruption above all else. If we selectively adopt Lee’s vision, we’ll almost instinctively take radical steps to free our bureaucracy and businesses of deep-rooted corrupt practices which means we’ll protect our upright, law-abiding practitioners – whether IAS officers or RTI activists - from the life-threatening toxic retaliation from the corrupt groups in power.

Unless we – both the government and the citizens – get authoritarian about things that can’t be left to either choice or conscience, all campaigns – whether Make in India or Clean India - will always remain a transient photo opportunity, lacking in foresight and laughable in hindsight. It’s high time our government thought beyond vote banks and rhetorical slogans, to become fearless about matters where fear alone brings about a positive change.