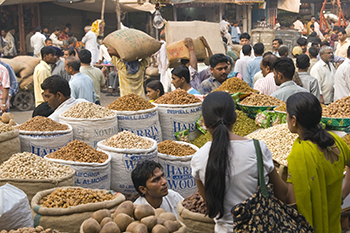 Risks to Inflation in 2019: Looking ahead

At each stage of development every country has a threshold level for inflation beyond which it leads to macroeconomic instability. For India, the tolerance level for inflation was considered to be 5%. In 2014, the Committee on Monetary policy framework stated 6.2% as the level of inflation beyond which it will be harmful to growth. Research on various economies suggests that in transition economies, inflation in the range of 4% to 5% would correspond to price stability, while in advanced economies it should be in the range of 1-3%. Inflation rate beyond this generally accepted threshold level likely results in macroeconomic instability and permanent loss in employment.

India’s average headline inflation has been growing below 5% since 2017, dropping down to below 4% growth since August 2018 and currently stands at 2.6% in Feb 2019. Rural inflation has been growing below 4% for two consecutive years. This roughly indicates some loss of steam in the growth momentum. Thus, it will be interesting to explore, how long the current inflation rate would stay at this level and whether the drivers of the current inflation are permanent or temporary in nature.

Oil prices to remain volatile with an upward bias: India’s higher dependence on the oil imports makes it susceptible to volatility in the global crude oil prices. In 2019, global crude oil prices are likely to increase from the 2018 levels given the decision of OPEC to cut production, while the risks to a significant rise are low given the temperance in the global economic growth led by a slowdown in China. As per the D&B global forecast, crude oil prices will rise to US$ 77 per barrel from US$ 71.1 per barrel in 2018. Researchers in RBI estimated that a US$10 per barrel increase in oil price will raise inflation by roughly 49 bps. Besides, the risk from imported inflation for other commodities stands low as weak global economic growth is likely to keep global commodity prices subdued during the year.

Correction in the inflation of some of the food articles and uncertainty over distribution of rainfall:

The inflation data shows some interesting trends. There is a divergence in the inflation of some commodities reported under WPI and CPI and there is also a rising disparity between rural and urban inflation. Rural CPI stood at 1.8% while urban CPI stood at 3.4% in Feb 2019. Going ahead, it is likely that we might witness some correction in the inflation of some of the commodities and also between the rural and urban inflation. The sharp divergence in the inflation, particularly in vegetables, pulses and cereals, under CPI and WPI is expected to correct. The latest data shows that inflation in some of the food articles which account for 78% of the total weight of the food and beverage category under CPI have reversed their trend in the month of Feb 2019. Secondly, there is a possibility of reversal in the inflation rate of some commodities as the base effect wanes out. Thirdly, we expect some course correction measures to be taken by the government to prevent the deflation in the food articles for an extended period of time.

It can be inferred that the current deflation in food articles is largely owing to supply shocks. The current broad based weakening of food prices, despite the hike in Minimum Support Prices (MSP) for 24 major crops which account for around 99% of commercial crops is surprising. For instance, MSP of pulses have been hiked by an average of around 9% since FY17, however the inflation in pulses continues to decline since Dec 2016.

The risks to food inflation from monsoon also remains uncertain. It is too early not only to predict a normal monsoon but also to forecast the average distribution of monsoon across districts. Last year, India Meteorological Department had predicted a normal monsoon. Not only was rainfall below the long term average, the spatial distribution of monsoon had led to deficit or large deficits in rainfall in about 39% of the districts during the monsoon season and around 67% of the districts during the post monsoon season. Further, it is too early to estimate the impact of the El Niño over the monsoon as the conditions are still evolving.

Fiscal slippages to exert upward pressure on inflation: Direct cash transfers are inflationary in the short run. Thus, the government direct cash transfers might have a limited impact on inflation till the output gap remains open. Besides, persistent fiscal deficits sooner or later lead to creation of money which afterwards have inflationary consequences. India missed its fiscal deficit target in FY18 and is likely to miss in FY19 by a higher margin than estimated owing to lower revenue collection and higher spending (direct income transfer). A fiscal deficit of 3.3 % for FY19 was envisaged assuming a nominal GDP growth rate of 11.5%. However, this estimate does not include the extra budgetary resources (EBR) that the government resorted to finance its expenditure. As of end Dec 2018, EBR stood at 0.3% of GDP.

Other factors: The other factor which might pose upward pressure to services inflation is the staggered impact of HRA revision by State Governments. Around 16 states have implemented the HRA revisions. The other states might announce the HRA revisions given that it is an election year. This might increase housing inflation which has currently moderated. The rise in the inflation in health and education since 2017 is also likely to keep core inflation elevated.

Anchoring of inflationary expectations would converge headline inflation to core inflation: The divergence between core and non-core in the recent months has been widening surprisingly as the second round impact of low oil and food prices should have fed into the core inflation by now. Core inflation remained high at an average of 5.7% during Dec 2017 to Feb 2019 and is likely to stay elevated for some time. The sharp increase in inflation in health and education would be a primary factor. Adjusting for the sharp increase in health and education for the last few months, overall core inflation would have been lower by at least by 40-45 bps. Generally, inflation in these categories is structural in nature and once entrenched does not witness a sudden change in course.

One of the reasons for this divergence could be the flexible inflation targeting regime adopted by India in 2014. Robust empirical evidence points out that a clear numerical target for inflation stabilises inflationary expectations in which everyone believes policymakers will keep inflation low. This eventually, contains the second round impact. Thus, anchoring of inflationary expectations would mean that as shocks to food and fuel eventually wear out, the headline inflation would converge to the core inflation.

To conclude, our assessment is that upward risks to the headline inflation are few and even if all the risks materialize, the CPI inflation is likely to edge up to 4%. Currently, there are largely supply side pressures to inflation while demand push inflationary pressures remain benign. Thus we anticipate policy rates to be reduced by another 25 basis points rates in the April 2019 bi-monetary policy meeting.