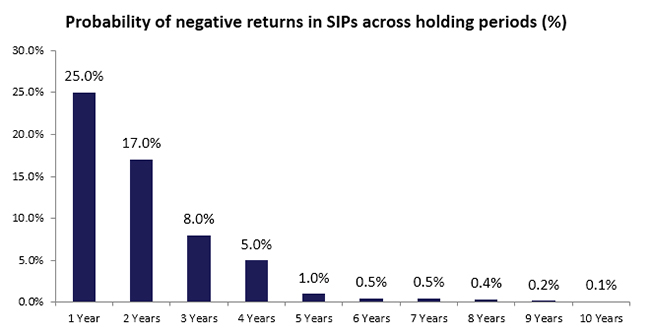 SIP flows: Did we miss the actual narrative in September?

The monthly inflow into SIPs continued to remain robust at Rs8,262cr for September 2019.

When the Mutual fund flow data for September 2019 was announced by AMFI, the one thing that struck readers was the sharp fall in MF-AUM from Rs25.5 trillion to Rs24.50 trillion. The fall was largely driven by outflows in debt funds and liquid funds. What was actually missed out was that the monthly inflow into SIPs continued to remain robust at Rs8,262cr for September 2019. The chart below is self-explicit.

The key take-away from the September 2019 AMFI data is that SIP flows continue to be robust. SIP flows are significant because they represent retail participation predominantly in equity funds and ELSS. Here are some key data points that emerge.
The AUM of the mutual fund industry was almost stagnant at Rs800,000cr between 2009 and 2014. However, post 2014, the AUM of the mutual fund industry has nearly tripled to Rs24,50,000cr. So, what exactly has been the SIP narrative that we are missing out.

1) Most Indian families are overexposed to gold
Did you know how much gold Indian households own? If you leave aside the gold held in temples, RBI estimates that Indian households have close to 22,000 tonnes of gold. That has a market value of nearly $1.25 trillion. Unlike equities, which are yet to become a retail product, gold is distributed fairly equitably among households in India. Contrast that with equities. If you leave out promoters and institutions, the retail participation in equities is substantially lower. That gap is now being filled up by equity mutual funds. The market vagaries of the last 11 years since the Lehman crisis taught Indian retail investors that timing the market is hardly a feasible game. Instead, SIP offers a much better alternative.

2) SIPs take care of wealth generation and cost reduction
In the last 10 years, SIPs have worked favourably in two ways. When you just keep chipping away at an equity fund with a regular monthly allocation, then the power of compounding works in your favour. That is because the principal and the returns continue to earn returns. The momentum really picks once the tenure of the SIP crosses 8-10 years. But the real kicker comes from cost reduction. SIPs not only manage volatility but also leverage volatility. When NAVs are up you get more value and when NAVs are down, you get more units. That brings down the cost of owning equity funds.

3) Above all, it saves the SIP investor from long term uncertainty worries
This is perhaps the most important narrative that we are missing. SIPs may not give assured profits but they substantially reduce the probability of loss. And that is something really valuable. The chart below captures how SIPs make investing relatively safe over the longer term.

This chart actually captures the gist of the SIP benefit. Once the SIP is held for a period of 5 years or more, the probability of making losses is marginal. It is this aspect of SIPs that Indian investors have experienced over the last 10 years. It is also the aspect they are sold on to. That is surely a narrative that is here to stay!