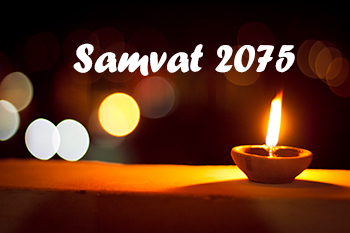 The best themes in Samvat 2075

The good news is that the Sensex delivered the best returns in Samvat 2075 as compared to the previous 3 years.

As Muhurat trading ushers in a new Samvat 2076, it is time to look back at the key outperformers and underperformers for Samvat 2075. The good news is that the Sensex delivered the best returns in Samvat 2075 as compared to the previous 3 years. What drove the stock market performance in Samvat 2075 and how the thematic stories stacked up?

The large cap Nifty clearly did a lot better than the mid caps and small caps during Samvat 2075. Of course, the Nifty returns were a little more stock specific. A handful of stocks like Reliance, TCS, HDFC Bank, HDFC, Hindustan Unilever, ICICI Bank and Infosys accounted for a bulk of the positive returns during Samvat 2075. The Nifty returns were close to 11% if the dividend yield was added and clearly gave the best performance in last four Samvat years.

Notwithstanding the economic slowdown, the consumption theme outperformed in Samvat 2075. FMCG was largely driven by Hindustan Unilever and the large MNC players like Colgate, Nestle and Britannia. The returns could have been much better if heavyweight ITC had not given negative returns. Private Banks saw a widening gap between the well positioned private banks and the mid-sized ones. HDFC Bank, ICICI Bank, Kotak Bank and Axis were among the gainers during Samvat 2075 but Yes Bank, IndusInd Bank and RBL showed stress on the asset quality front. Another major gainer was realty, but that was a more a combination of DLF and the south based players.

Needless to say, the auto sector disappointed after sales fell for 11 months in succession. Tepid demand for consumer durables, high fuel prices and tight funding conditions combined with higher funding costs took its toll on auto demand. As Maruti’s results showed, the leader is struggling to increase sales despite offering progressively higher discounts. Other auto stocks would only be worse off. PSU banks were a contrast to the private banks as consistent defaults by companies like IL&FS, Dewan Housing, ADAG group, Jet Airways, Essel Group and Cox & Kings kept PSU banks under pressure. Metals were weak on the back of the prolonged US-China trade war and a distinct slowdown in China, quarter after quarter. For the pharma sector, it was another bad Samvat with intense competition, consolidation of pharmacies in the US, cost pressures and FDA investigations adding up.


Consumption continued to be the ruling theme for Samvat 2075. Despite falling volume growth, profits continued to be robust on the back of better cost control and lower input prices. The outperformance of energy was largely driven by Reliance Industries and BPCL. RIL continues to restructure and reinvent; but BPCL was the surprise package on the back of expectations that a full scale privatization by the government would make the company more efficient and salivating for investors. Even as MNCs gained in a tough year, it was the low volatility value theme that did extremely well.

Central public sector enterprises (CPSEs), outside of PSU banks, also disappointed. Most sectors like metals, coal and power were disrupted by serious internal operational problems. The big surprise was that the high beta theme turned out to be big losers during Samvat 2075. Of course, Nifty did end in the positive, but the traditional high beta names in autos, financials and metals did worse in the downturn but hardly participated in the upturn. To sum up the thematic story of Samvat 2075, it was a case of low volatility beating high beta and also a year of value clearly beating growth as a theme.

How the business groups fared in Samvat 2075?
Data Source: NSE

Among the three major diversified groups in India, only the Tata group managed positive returns in Samvat 2075. This was despite weak performance by Tata Motors and Tata Steel. The Tata group returns were largely salvaged by TCS and Titan, which made up for all the other lagging stocks. Aditya Birla Group, with its predominant exposure to commodities like aluminium, copper, cement and chemicals was under pressure. The problems at Vodafone Idea only added up. M&M, with a strong dependence on auto and financial services remained under pressure, although Tech Mahindra did better.

In a nutshell Samvat 2075 was a difficult year for the markets where the gaining themes were extremely selective. The year was a vote for stability and the ability to manage risk.