The Monetary Policy Committee (MPC) had decided to keep the repo rate unchanged at 6% in its last meet but highlighted its cautious view on rising inflation. The objective of the MPC has been to maintain the near-term consumer price inflation at 4% within a band of +/- 2 percent while supporting growth.

Following is the voting outcome of the previous meeting by the MPC members.

Since its last Monetary Policy meeting held on April 05, 2018, following key economic developments have resulted into rise in inflation, which could add on to an expectation of a rate hike:

a) Crude oil prices have surged by nearly 7%, which has resulted into sharp spike in domestic petrol and diesel prices that would lead to a sharp surge in consumer price index reading.

b) Heavy selling pressure has been witnessed by Foreign Portfolio Investors (FPI), dumping $6.6 billion of India debt and equities in the financial year 2018-19 due to concerns of fiscal deficit ballooning, which has added humongous pressure on the domestic currency.

Key indicator of a rate hike

The key indicator is the spread between 10 year G-Sec and RBI repo rate.

The gap between the 10-year government bond yield and the RBI’s benchmark repurchase rate widened to 178 basis points as of June 04, 2018, which is nearly at the highest point since the last 5 years. A winding of spread is usually witnessed at the start of the tightening of a rate cycle. 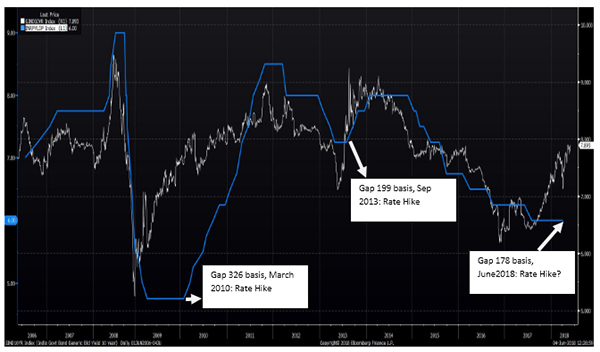 The 10 year G-Sec- RBI repo rate spread has been a reliable indicator in the past.


Smart traders in anticipation of a rate hike have already build-up short positions in the financial stocks.

Following is the list of stocks that have witnessed a build-up of short position since the start of the June F&O series.


Note: Open interest (OI) is the total number of outstanding contracts that are held by market participants at any point in time. It can be used to gauge & identify intermediate trend of underline securities in future and options market.


Impact of rate hike on the consumers: