x
Home » Top News » What does a strong government at the centre mean for stock markets? 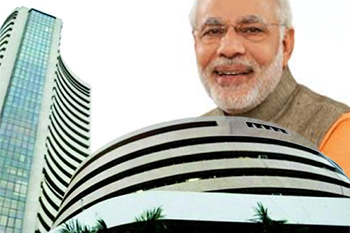 What does a strong government at the centre mean for stock markets?

A strong government with a strong leader would mean that the government can afford to think out of the box on economic reforms.

The counting of votes and the VVPAT verification may go late into the night but that is almost a formality now. It almost appears like a fait accompli that the BJP on its own would get over 300 seats and the NDA combine would get well over 350 seats. This has been perhaps the most decisive mandate for any party since 1984. Not only has Modi beaten anti-incumbency but has emerged with a much higher vote share percentage compared to 2014. The NDA ran its campaign on the catchphrase, “Majboot Sarkar” and that seems to have worked. Indians love strong governments and that is why the promise appealed.

But, does a promise of strong government really have implications for the stock market? Here are four reasons why we think so.

Strong government hints at continuation of the reforms process

One of the things the market looks forward to is certainty of reforms and continuation of the reforms process. With a strong government at the centre, markets are now assured that both these will be taken care of. Out of the many reforms that the government undertook in its previous term, some of them like GST and the Insolvency Code are still work in progress. They will require the continued involvement and support of the government to take these reforms to their logical conclusion. Now markets have an assurance that the full benefits of the IBC and GST will be realized in the coming years.

Bold reforms can be taken up with greater confidence

Back in 2016, demonetization may have appeared to be a fairly adventurous, even suicidal, move. Ironically, it helped the banks shore up their liquidity and reduced interest rates. This was largely successful in triggering the bull market rally in 2017. There are a lot of reforms that are pending and require a strong government backing it. Land reforms and labour reforms have been pending for a long time. Real Estate is another sector where the reforms have been spasmodic. A strong government with a strong leader would mean that the government can afford to think out of the box on economic reforms. Also, this win should help them gain a bigger foothold in the Rajya Sabha too, which will make the passage of bills easier. That is something that had impeded the NDA government last time around.

Financialization of savings will happen at a quicker pace

The big benefit to the capital markets in the last five years came from the financialization of assets. The spread of broadband, internet trading, Jan Dhan accounts and Aadhar ensured that millions of small and medium sized investors could be brought into the organized investment fold. That explains why the mutual funds AUM went up from Rs8 trillion to Rs23 trillion in just five years. That has not only supported the markets when FPIs are selling but also ensured millions of small investors create long term wealth through mutual funds. Financialization has been the core focus and will accelerate considering the mandate they look set to get. It is indeed an advantage for the stock markets!

We often tend to ignore this point, but there is a correlation. Over the last five years, the markets have been able to sustain above par valuations despite low growth, due to the confidence of the markets in the government. It has been seen in the past that stable governments combined with stable policies provide a predictable environment for stock markets. That has surely resulted in better valuations accorded to the Indian markets. With a much higher vote share percentage this year, that could only get better.

A strong government with a decisive mandate has the luxury of talking to stakeholders on equal terms. That is evident from the way India has handled the US, China and the Middle East in the last five years. For a market looking for sustainable leadership, it could not have come from a better place!