Read Full Story
Back in 2015, Tony Westbury of the Edinburgh Napier University wrote an article in Biz News suggesting that “Rafael Nadal was a spent force and it was time for him to bid goodbye”. That was after Nadal’s early exit at the 2015 Wimbledon. Had Tony Westbury watched Nadal live on June 10, 2018, he would have surely eaten his words. What Tony, with all his academic refinement, possibly missed out was that champions like Nadal are made of different stuff altogether. Like in the Darwinian Theory, they survive and thrive because of their ability to constantly learn, re-learn and adapt along the way. 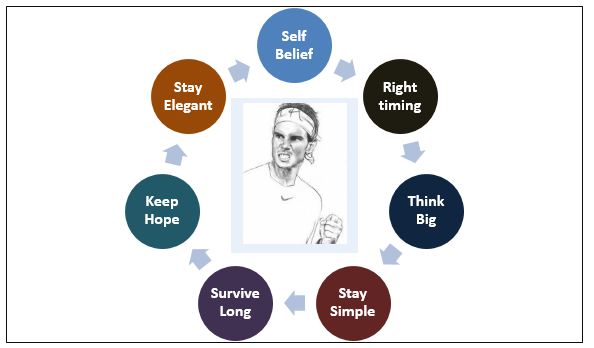 For serious long-term investors, there are seven lessons to glean from Nadal’s 11th French Open Title at the Roland Garros.

Nothing comes close to self belief

Self belief or conviction comes from years of rigorous practice and the ability to bounce back from reverses. Be it a Federer on grass or Nadal on clay, it has been a game of self-belief. Both are on the wrong side of their 30s and in a strenuous game like tennis, age matters a lot. For an investor, success stems from self-belief. Your investing journey will have its ups and downs. How you create a Rafael Nadal portfolio and go through the odds is what will differentiate a good investor from a great investor. With self belief comes longevity and that is when you are able to survive and thrive in the investment game for a very long time. That is what sets a Warren Buffett apart from the crowd.

Give your best at those crucial moments

To be the best, you must imagine the impossible

When the Swedish iceberg, Bjorn Borg, claimed the French title six times, most commentators believed that the record would never be broken. Even when Nadal bettered the record in 2012, it was hard to imagine that he would go on to win 11 titles. That is what happens when you imagine the impossible. How many investors would have imagined that Rs10,000 invested in Wipro in 1980 would be worth Rs450cr within 20 years. That may be hard to imagine but the moral of the story is that if you want to succeed as an investor, you must dare to dream and think big.

Nadal bounced back from a spate of injuries when he was almost written off as a tennis player. The ability to sustain your leadership stems from the belief that every day is a new day and you should not let your yesterday condition your tomorrow. That is absolutely true of investing too. There are bad days and there are awful days in investing. There are atrocious mistakes you will commit. Your ability lies in learning from these instances and moving on. To be successful, you must have the ability to forget the past and focus on the future.

Stay humble and keep it simple

Great players are great simplifiers and that is absolutely true of Nadal. He not only focuses on his personal fitness and training but also carefully evaluates his opportunities against opponents. One thing about Nadal’s game is that there is no complication. He plays to his strength, which is his baseline game. And, you will hardly see even a hint of arrogance in his game. As an investor, it is necessary to be humble and accept that the market is smarter than you. That is what sets you apart.

Longevity is the key to great performance

There is a famous saying in tennis that “When in doubt just hang on”. That has been the underlying theme of many a game that Nadal has played. Your ability to snatch victory from the jaws of adversity is what makes you a champion and ensures longevity. An investor too has to go through reverses. But if he does the small things right and hangs on to good stocks for the long term, he is bound to make profits. Longevity is the key.

Ensure that you win and lose elegantly

It is always good to see great champions like Nadal and Federer not sharing any animosity at the end of a game. Both have given their best and the ultimate champion is actually immaterial. That is what helps them win and lose elegantly. That should be your strategy in investing too. You win some and you lose some but don’t ever lose your elegance.