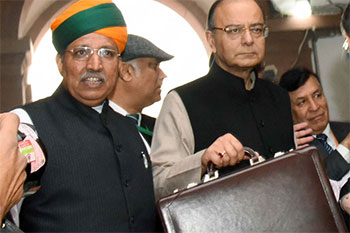 Finance Minister Arun Jaitley will present his 6th Union Budget on February 1, 2019. However, this will be an interim budget and not a full budget. Yet, a lot can be expected from it given that it is election year, and like all previous governments, the current government would also want to appease various categories of the Indian voter base.

The upcoming budget, therefore, may almost be a manifesto for the BJP before the general elections.

An interim budget provides details regarding the income and expenses incurred by the government during the previous as well as any expenses proposed to be made over the next few months until the new government comes into power. It must be noted that no expenditure can be incurred from the Consolidated Fund of India unless parliamentary approval is obtained.

Addressing the big “A”
A key focus for the government this year will most certainly be the agrarian crisis engulfing the farmer community. The recent loss of the BJP in state polls has brought to fore the resentment of seething farmers, which appears to have been largely ignored by the ruling party.

Although FM Jaitley has always maintained that farm loan waivers will not solve the issues long plaguing the farm sector, loan and interest waivers may seep through into this year’s budget 2019.

Apart from waivers, a farmer relief package may be released including support for the purchase of fertilizers, seeds, and machinery as well as expansion of farm credit target, according to media sources.

Two targets, one aim
The MSME sector, which is currently reeling under a multitude of challenges, is also expected to get some of the budget cheer. According to ICRA, as much as Rs10,000cr of MSME dud loans may be restructured. More incentives may also be on the way for these small enterprises, which may, in turn, lift the sector and enable job creation.

Wooing rural and urban middle class voters
It is unlikely that the government will bring about any change in the structure of direct taxes. However, as announced last month in the GST Council meet, the government is stressing on bringing most items under a common/standard GST slab of 18% or 12%.

Apart from this, the government has reduced GST for 23 common use items effective Jan 1, 2019, with very few items now falling under the 28% GST category. Further, custom duties on certain items that were raised last year have a chance of getting trimmed.

Rural infra was given a significant boost in last year’s budget and the Ayushman Bharat healthcare programme was also announced. There is scope for the latter being widened this year to cover families beyond the 10cr figure announced in 2018.

The new ecommerce FDI policy released by the government recently also seemingly titled in favor of traditional retailers and small traders and may insinuate more such proposals to come in the budget next month.

No room for bad news
Assuming that voters will be extra-sensitive to budget announcements, the government, like all other previous ones, may steer clear of any unpleasant announcements, like the LTCG tax and custom duty hikes, announced last year.

Infra, telecom, and digital may get a further push as has been the case through the Modi regime since 2014.

Swacch Bharat and affordable housing may also find a mention.

To conclude…
The interim budget may not be replete with drastic changes, however, it is always a pre-election opportunity for the ruling party to present an A+ on the government’s economic report card as well as make promises that all the good things are yet to come.

That this budget will be a populist one is a forgone conclusion, thanks to the upcoming elections. However, to resolve long-standing challenges such as the bleeding agricultural sector and bring about structural changes, will the government focus on “incentivizing” rather than “subsidizing” things for the common man?

Our hopes remain pinned on the former approach!