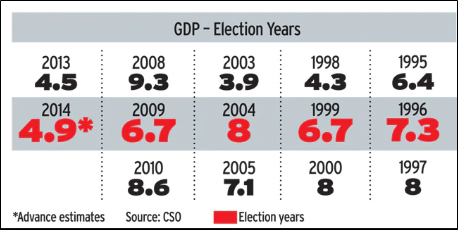 Will Elections-2019 decide the fate of markets?

Let us analyse whether the markets will be driven by fundamentals or election outcome will impact the markets.

The 2019 elections could be one of the most critical in recent times. The Indian economy stands in a state of flux and the global environment is getting increasingly uncertain. While the markets have always preferred continuity, the popular mandate has the capacity to surprise either ways. Let us look back at the general elections post liberalization and see the impact on the macro-economy in general and the stock markets in particular.

How have markets reacted to previous elections? 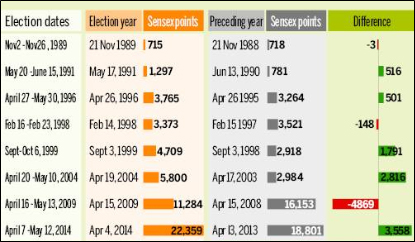 The above table captures the movement in the Sensex in the Election Year compared to the previous year. The quick conclusion that we can draw is that election years have generally been positive for the markets. Elections 2009 may be an exception because at that point of time, the entire world economy was just coming out of the global recession triggered by Lehman bankruptcy. Hence, the sharp negative returns may be more an exception than a rule. If you leave out the outlier of 2009, stock markets have given positive returns in most of the election years as compared to the previous year. If this sounds too abstruse, one can adopt a more passive approach. In each of the elections, if you have bought the Sensex portfolio 6 months ahead of elections and sold the portfolio 6 months after the elections, you would have earned positive returns on 5 occasions and negative returns only on 2 occasions. The two occasions when there were losses were in 1996 and 1998, when there were minority coalition governments. Markets will be more a vote for stability!

Does the macro economy also react to the elections?

The numbers highlighted in red colour represent the election years GDP growth rates. Interestingly, in most election years, the GDP growth has been better than the previous year. Here again, the exception is the 2009 elections when growth fell during the election year. But as we explained earlier, that was an exceptional year due to the economy emerging from the Lehman crisis. If you remove that outlier, we also have an economy that has responded positively to elections. Out of these five elections, only 2014 had a full-fledged absolute majority government. The moral of the story is that the Indian economy has the requisite momentum to sustain growth irrespective of nature and the political mix of the government. That may be good news for the economy, and of course the markets.

Economics and markets go beyond elections

Lastly, Indian economy and markets are a lot more globalized than we care to believe. Global cues will continue to drive the short to medium direction of the markets.