x
Home » Top News » With Modi back, what's next on the reforms path? 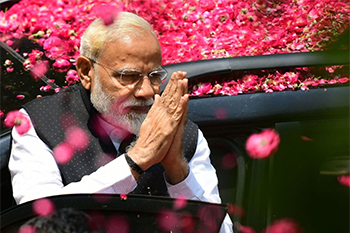 With Modi back, what's next on the reforms path?

The SME sector that has taken a hit after the combination of demonetization and GST, needs a boost.

Even as the outcome of the elections started becoming clear by the first half of May 23, 2019, the Indian corporate sector was the first up with its charter of demands. To a large extent, it is the Indian corporate sector that has supported the reforms tilt of the Modi government since 2014. Now India Inc is just urging the government on its reforms path for the next five years. What are Modi’s immediate priorities on the economic reforms front?

Tackle unemployment before it becomes bigger

Whether you look at job creation in the rural or urban areas, any data point will show that jobs leave a lot to be desired. While data points like 7.2% unemployment put out by CMIE can be open to interpretation, there is no gainsaying that jobs are the challenge. India has prided itself on the demographic dividend but that requires jobs. There are 3 key areas to focus on. Firstly, the SME sector that has taken a hit after the combination of demonetization and GST, needs a boost. Secondly, agricultural has to become more productive and MSP can only help up to a point. Lastly, the previous government spoke extensively about re-skilling initiatives. That is a priority if large swathes of Indian population have to be saved from professional irrelevance.

Simplify the GST; it must be easy to implement

When the GST was launched in 2017, Modi called it Good and Simple Tax (GST). This time around the government has to underscore that it is actually simple. For starters, the number of slabs and rates can be brought down to just 2-3 median rates. For example, you can have essential goods, demerit goods and other goods. The lesser the number of rates, the simpler it is to implement. GST imposes a huge compliance cost on small businesses, which possibly explains why the Council has struggled to improve collections. The Modi government should seriously look at more realistic levels of exemptions, simpler on-boarding process, easy execution and ensure that officers avoid persecution.

Banking has come a long way; but longer to go

If there is one area of reforms that stood out in Modi 1.0, it was banking reforms. The focus on loan recovery through the Insolvency and Bankruptcy Code (IBC) has helped banks recover at least 30-40% of the loans outstanding. The more complex part will be when the banks have to deal with the next set of sectors like power and telecom. Also, there are scores of companies with little physical assets created on the field. They could be the real sore points. The challenge is to fast track the banking reforms process. Apart from IBC, the government has to also focus on making the PSU banks structurally competitive vis-à-vis private banks.

As the NDA and the UPA tried to outbid each other in the welfare sweepstakes, the Modi government has made promises that are going to impose a huge cost on the fiscal front. This includes PM-Kisan project and the huge infrastructure outlays over the next five years. The government allowed its fiscal deficit to spill over by 20bps in the last 2 years but it is time to get back to the discipline of FRBM and move towards 3% fiscal deficit target. There has to be a focus on expenditure control and enhanced revenues. Loopholes in income tax and GST have to be plugged and disinvestment of PSEs needs a bigger boost.

Farm distress continues to be the big challenge. The promise of doubling of farm incomes by 2022 cannot be just about MSP, but a structural shift in agriculture. The onus is on the government to make agriculture less vulnerable to the vagaries of the weather Gods and more productive for the rural and semi urban India. That could be the immediate challenge for Modi 2.0.