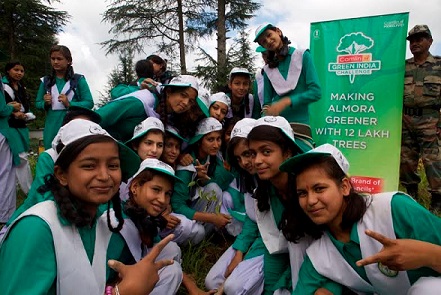 More than 10,000 school children, teachers, civilians, civil servants and eco warriors participated in an initiative organized by Kokuyo Camlin and the 130 BN Eco Task Force and also the forest department of Uttarakhand to plant 10 lakh saplings in a single day to make the Kumaon hills green once again. The 130 BN Eco Task Force have been assigned by the Government of India to fight deforestation in the hills of Uttarakhand.

The plantation activity was taken up by three companies of the 130 BN Eco Task Force in Pithoragarh region and one company from the Almora Region.

Saumitra Prasad, Chief Marketing Officer, Kokuyo Camlin Ltd, said, “We have been highlighting the need to save trees. We have successfully planted 10 lakh saplings today along with the efficient 130 BN Eco Task Force. We have an excellent association with 130 BN Eco Task Force since we had initiated a similar activity of planting saplings wherein we planted over one lakh saplings in Pithoragarh last year and received tremendous response to it. This is our small attempt to fight deforestation which has been a major cause for landslides, soil erosion and thinning of streams. Kokuyo Camlin's emphasises on the use of Mechanical Pencils which does not use wood in its production and also provides a great writing experience. We are also creating awareness about these initiatives through our social media platform and hope that this will inspire children to be environmentally aware and responsible.”

The school children along with all the other participants were quite excited and enthusiastic while planting the trees. The trees that were planted have come out of the nurseries of 130 ETF and these trees will bear and provide fruit, fodder and timber. It is noteworthy that last year, the 130 Eco Task Force in association with Kokuyo Camlin had created a record by planting 103096 saplings with the help of 6000 + school students and civilians lead by the Chief Secretary of the State.

The forest department of Uttarakhand also supported the Eco Task Force in this important operation. The District Forest Officer, Dr. I. P. Singh and his team joined the plantation activity and appreciated the efforts put in by the volunteers. The Commanding Officer of 130 Eco Task Force, Col. Nandukumar B. who was leading the event thanked all the participants and supporters including the schools, district administration, police and forest department.

More than 10,000 school children, teachers, civilians, civil servants and eco warriors participated in an initiative organized by Kokuyo Camlin and the 130 BN Eco Task Force and also the forest department of Uttarakhand to plant 10 lakh saplings in a single day in Pithoragarh and Almora Region.